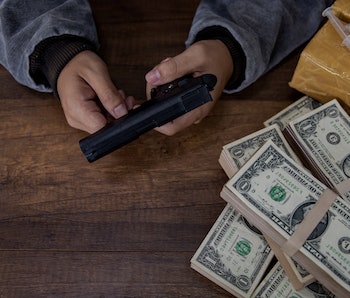 Facebook Marketplace, the social network's competitor to Craigslist, is being used to sell guns and ammunition despite the company's prohibition on weapons sales. That's according to The Wall Street Journal, which discovered that sellers sidestep the ban by listing their items as stickers. For instance, sellers post listings advertising ".040 sticker" or ".40 caliber Glock sticker" and then move over to direct messages with interested buyers to confirm what they're actually selling are real weapons.

Since direct messages are private in nature, Facebook can't easily see what's happening once two parties move there to confirm an item is a real gun. One way Facebook could tell a "sticker" is actually a real gun? The stickers are listed at prices ranging in the hundreds of dollars.

Algorithms are dumb — The issue highlights the challenges in how Facebook relies on algorithms to police its platform; humans often find simple ways to evade the technology. Apparently in some cases, after users have reported these "sticker" advertisements as deceitful, Facebook has not taken down the ads and even continues to show them to the same users who filed reports.

Facebook Marketplace has become a sizable competitor to Craigslist since rolling out in 2016 as a new way for the company to make money. The service is slick and requires every buyer and seller to have a profile on the site, making spam a lot less prevalent than on Craigslist. Built-in messaging is convenient for communicating with sellers without giving up your private contact details. But clearly the privacy therein enables shady behavior to fester.

The company could easily crack down on these listings by updating its algorithm to catch listings with gun-related terms that are priced highly, or all gun-related terms in general. But surely that won't stop users from finding another way.

The house Facebook built — It's unsurprising that Facebook is struggling to combat these issues considering its platform was built to scale as quickly as possible, and the company often says it never foresaw the content problems it faces today. But it's a company now worth $780 billion that brings in mighty profits, and critics believe it's long overdue that the company pay to clean up the mess it made. It's easy to see how allowing guns to be sold on Facebook could go horribly wrong.