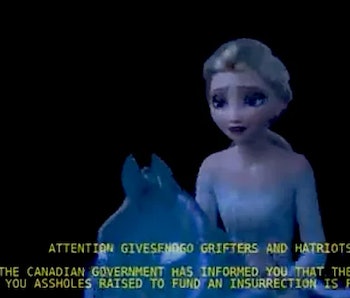 Hackers have recently targeted the crowdfunding site, GiveSendGo, which had been raising funds for a protest movement dubbed the “Freedom Convoy.” The site went down on Sunday night and rerouted users to a different domain entitled GiveSendGone[dot]wtf — once there, visitors were greeted with a looping Frozen II video, featuring Princess Elsa singing “Show Yourself.”

The Daily Dot, was the first to report on the site’s breach and noted that the leaked data included “email addresses, IP addresses, zip codes, and names (although some users could have used fake names).”

Freedom Convoy— The Canadian movement is compromised of truck drivers that oppose vaccine mandates within the country. Rallies led by truckers had been actively blockading a range of border crossings across Canada, with as Reuters noted, “demands that include the deposition of Prime Minister Justin Trudeau.”

The decision to use GiveSendGo, which is self-described as “the number one free Christian crowdfunding platform,” was made after challenges emerged with GoFundMe. The latter is a far more visible and mainstream crowdsourcing platform, and stated that it would be “withholding millions of dollars raised for Canadian truckers protesting against vaccine mandates.” GiveSendGo immediately emerged as a willing service for the Freedom Convoy and announced it would accept donations following GoFundMe’s announcement.

“On behalf of sane people worldwide who wish to continue living in a democracy, I am now telling you that GiveSendGo itself is frozen,” was among the messaging in the Frozen II loop. “The leaders of this ‘movement’ are known extremists who publicly stated that they want to overthrow the government.”

Based on the response to the security breach above, GiveSendGo confirmed that it shut down its site after the hack and seems intent on not backing down. The platform managed to raise around $8 million in funding for the Freedom Convoy. GiveSendGo has raised money for other far-right causes including defense fees for Trump supporters that were involved in the Capitol riot as well as for the Proud Boys, a violent, extremist group.