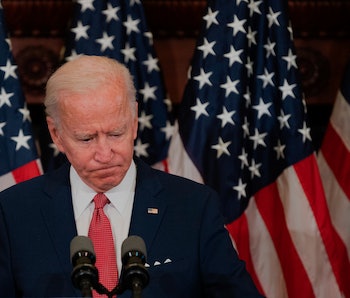 For the past two months, as first spotted by the Tech Transparency Project and then reported by BuzzFeed News, Instagram's hashtags feature has prominently favored Donald Trump over Joe Biden.

When it came to displaying searchable terms for Biden, the report states that there was much more "vitriol" for the presumptive Democratic nominee, while Trump enjoyed the more favorable spotlight. Instagram says it was a bug, but more importantly, whatever the reason, it's further evidence that the claim that tech is staunchly anti-conservative is unmistakably overblown and misleading.

What happened? — According to BuzzFeed News, Instagram reportedly removed negative hashtags to appear in searchable form for #Trump, #Trump2020, and #MAGA. When it came to Biden, hashtags like #NeverBiden and #CreepyJoeBiden appeared. While Biden's campaign did not officially comment on the issue, Trump's communications team complained — in what has become a frequent lament on the politically conservative side of the aisle — that there is systemic bias and prejudice against the right in the tech industry.

"It's preposterous that Silicon Valley, the bastion of diversity and liberalism, is terrified of intellectual diversity and conservative voices," Trump's 2020 deputy national press secretary Ken Farnaso said. Never mind that that the claim has been debunked thoroughly and repeatedly on Capitol Hill.

Instagram lashes out — In comments to BuzzFeed News, Instagram characterized the hashtag issue as a "bug" and claimed that it had disabled the feature. On Twitter, however, the company's communications team took a defensive tone and tweeted the following at the journalist behind the report, Ryan Mac: "This isn't about politics. Tens of thousands of hashtags were affected, and your story cherry-picked a handful of those thousands to fit a sensational narrative. The bug was also not partisan, as you note #Democrats were impacted."

Within minutes, Mac responded, "Instagram is questioning my reporting and integrity so I want to be clear about my response. This is not a sensational narrative. Instagram's 'bug' caused related hashtags to be hidden on searches for leading Trump hashtags," adding "That's a fact."

Major repercussions — There's a fundamental difference between a bug in hashtags for beginner level embroidery and presidential elections. The consequences for the latter, with a presidential race around the corner, radically outweigh those of the former.

If 2016 taught the tech sector in the United States anything, it was that the presidential race and the cybersecurity controversies and lapses at the time severely damaged public trust in these platforms and the companies that create and back them. Facebook, Instagram's owner, should be especially acutely aware of the fragile landscape it inhabits. But it sounds like a mass boycott, criticism from lawmakers, and general public disdain for the company has taught Mark Zuckerberg's enterprise very, very little.