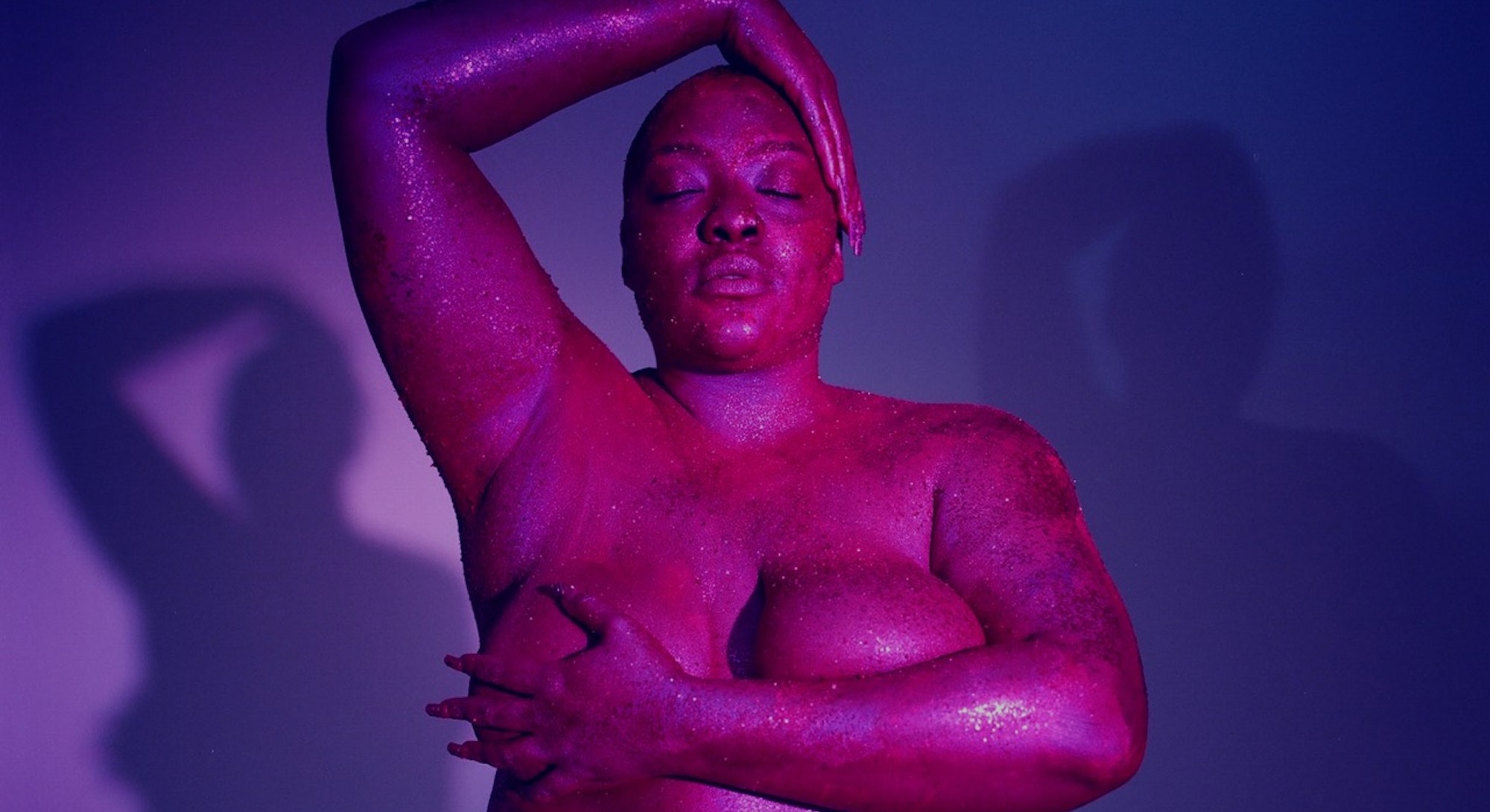 Back in April, I posted an image of myself — my breasts covered by my left arm and a ball gag in my mouth — on my Instagram account.

After Megan Ixim, a fat activist and social media manager from Jersey City, NJ, shared it in her stories, Instagram removed it from there, citing a “hate speech” violation. Which is kind of funny seeing as my mouth was full. The following day the post was removed from my feed, without warning.

I reposted the image with text in a black box calling out Instagram for censoring fat bodies.

This post was immediately removed for “sexual activity.” I was furious, so I reposted the picture one last time, covering everything except my right arm and part of my face with a text box reading “This is how Instagram wants fat black femmes to post.” (I identify as nonbinary, but embrace the term “femme.”)

This post garnered a great amount of support from followers and strangers alike. I received many comments about how people were seeing images of white, thin bodies in little to no clothing — even with fully exposed breasts and genitals — on Instagram. Other Black, fat femmes hopped on the post to share their stories of being censored.

I even received enthusiastic support from a thin, white person: “I’m a skinny white bitch and have literal photos with my whole tits out [that] they haven’t taken down. This is pure fatphobic antiblack bullshit!”

The situation had been building to a head for a while. During the early summer of 2020, I was starting to make a lot of body, sex, and kink-related content. I started to wear less clothing and speak out more about fatphobia and misogynoir. At that point, I noticed a shift. I was posting consistently, yet my engagement dwindled, and I wasn’t gaining many new followers. Something was amiss, but I thought it was a “me” problem.

“We realized it was an instance where our policy on breast squeezing wasn’t being correctly applied.”

However, soon enough I found out there were systemic issues at play. Later that summer, Instagram repeatedly took down a professionally shot image of plus-size model Nyome Nicholas-Williams with her arms crossed so that she was covering her breasts. Hundreds rallied to the cause, posting photos of Nicholas-Williams with the hashtag #IwanttoseeNyome and pointing out that thin, especially white, bodies are allowed to exist on Instagram without ramifications.

In October, the protestors got some results. While denying racial bias, Instagram said that “we realized it was an instance where our policy on breast squeezing wasn’t being correctly applied.” This led to a change in the platform’s nudity policy.

It was a victory, but a tiny one. As I learned through my own experience and those of the creators I interviewed for this article, things in general have not gotten better for fat, Black femmes on Instagram. The situation still sucks.

In July, Instagram introduced a new feature called Sensitive Content Control, which the company says “allows you to decide how much sensitive content shows up in Explore.” This sounds great in theory, but Myasia Burns, a social media specialist who currently works for Midan Marketing, a meat-industry marketing firm, isn’t so sure.

“Any time an app releases a new feature that reads as intentionally vague — as the Sensitive Content Control reads — that is a threat to marginalized content creators,” Burns says. “They often find their content reach is severely limited or completely nonexistent with no explanation from Instagram as to why.”

After hearing this, it dawned on me that this could be the reason as to why my account was underperforming. Was I being shadowbanned?

Meanwhile, the level of in-your-face censorship is just ridiculous. “One time, I posted a dancing video of Venus of Willendorf” — a Stone Age figurine — “and the post was removed shortly after for violating ‘community guidelines’,” says Jervae Anthony, the San Diego–based founder of an activist organization called Fat Black Liberation.

“The statue represents that fatness isn’t some new thing,” Anthony says. “We’ve been here. We’ve been holy, and I just wanted to show that fatness is a part of humanity. Constantly being shadowbanned and having my content not reach or be removed from my audience makes me feel ostracized.”

“I was told that it ‘goes against our community guidelines,’” Asiama says. “I was enraged, and I took to my IG stories to express my feelings, tagging Instagram directly.” She has yet to receive a response.

The censorship can make already marginalized people feel even more so. “I am a dark- skinned, fat Black woman, and I know that Instagram limits my visibility because of it,” says social media influencer and community organizer Danni Adams, who’s from Sanford, Florida.

“Instagram has threatened to delete my account for wearing a bra and panties, which is the same thing that I see thin, light-skinned and white people blow up and get thousands and millions of followers for,” she says. Adams adds that a picture of her fully clothed was once removed without explanation.

Even throwing money at the problem doesn’t seem to work. Brandon Stewart, a nonbinary femme and content creator from Houston, has invested in Instagram’s paid-promotion tool; they say they still haven’t seen any results. They say Instagram has removed a lot of posts from their stories, including one in which their breasts were visible.

“I identify as nonbinary, but because of my intersections of my fatness, queerness, Blackness, and femmehood,” Stewart says, “I am subjected to a level of harm that is usually associated with people who identify as women.”

When Black, fat creators aren’t being stifled, they’re being bullied. I am continually being harassed on Instagram, whether it’s being called a “gorilla” or a “sick, ugly pig.” I’ve been misgendered and told that I “flick my bean to the food channel” and assorted other vile things.

La’Shaunae Steward, a curve model and fashion designer from South Carolina, says that they are “constantly degraded and disrespected [by users] trying to humble [me] with fatphobic slurs and concern trolling.” After Steward reported these comments to Instagram, they say they received a notification that the statements wouldn’t be removed, as the comments supposedly do not violate the community guidelines.

(Being a celebrity doesn’t make you immune to all this, but having a higher profile helps a little. After the musician Lizzo spoke out on IG Live about the “fatphobic” and “racist” attacks she’s received on social media, Instagram and Facebook removed hateful comments.)

All of this is exhausting for creators. Kris, a New York–based photographer and content creator, has taken several hiatuses from Instagram because of shadowbanning and “inexplicable content removals.” “When you don’t feel welcome, you don’t stay,” she says.

According to a Facebook spokesperson, Instagram (which is owned by Facebook) has received feedback and complaints from fat, Black femmes and is working diligently to address concerns of silencing. Last year, the platform established an Instagram Equity team focused on “better understanding and addressing bias in our product development and people’s experiences on Instagram.”

Additionally, the Facebook spokesperson points out, fatphobic slurs are now flagged as “hate speech,” and users can access a digital paper trail detailing both their own community guidelines violations and their reports against others. The spokesperson tells Input that Instagram works with outside contractors to better the experience of all users, including fat, Black femmes, but did not elaborate.

All that aside, I don’t feel that the work that the app is doing is really helping me and many other people who share my intersections. We are still being rendered voiceless.

Black, fat femmes shouldn’t have to beg and battle for visibility. We have every right to receive the same treatment as others, to create the content that we want to put out. We deserve autonomy over our voices and bodies, and we shouldn’t have to walk on eggshells to use an app that prides itself on being a space for all to create and connect with each other and their respective communities.

As one of those people — whose follower count, likes, and shares continue to decline on a daily basis — I do not hold out hope.