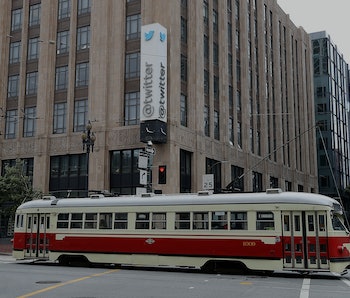 Twitter CEO Jack Dorsey confirmed some old fears of San Francisco politicians in an earnings call on Thursday. According to BuzzFeed News, Dorsey is now thinking globally and not about the city that gave Twitter tens of millions of dollars in tax incentives over the past decade. Twitter’s headquarters isn’t moving, as of now, but Dorsey's priorities are shifting to new cities and remote work.

SF, baby, what have you done for me lately? — Twitter’s headquarters is nestled in Mid-Market, a Tenderloin-adjacent neighborhood the city has desperately tried to gentrify. In 2011, the city pushed tax incentives that brought companies like Uber and Twitter to commercialize the area. After the typical workday, however, the notoriously crime-dense area hasn’t changed much.

As the city’s politics have moved left over the years, officials let the tax breaks expire in May 2019. The year prior, the city’s citizens voted to have companies making more than $50 million in revenue pay additional taxes to help the city’s homeless population. Dorsey opposed the measure because he believed his other company, Square, was being pushed to pay the same taxes as larger corporations in the city.

Fast forward to 2020, and Dorsey’s tune has changed: “Our concentration in San Francisco is not serving us any longer and we will strive to be a far more distributed workforce. We have to build a company that’s not entirely dependent on San Francisco.”

Twitter’s a bit stuck — The Twitter workforce isn’t going anywhere in the immediate future, and that’s partially due to the company itself. The tech boom in the Bay Area has influenced what economists call cumulative causation. This occurs when a new industry sets up shop in an area beneficial for it to thrive, and then the success of those companies draws specialized workers to the area. This magnetism increases the salary expectations in the city, inspires entrepreneurship, and in the case of San Francisco, drives up the housing market while pricing out locals.

A 2019 Brookings Institute report found that five metropolitan areas, three of which are in California, attracted most of the innovation sector’s jobs since 2005. The concentration of tech workers in the increasingly left-leaning state makes it unlikely for Dorsey to spread Twitter’s wings in another American city. He seems to be really jonesing for Africa lately, however, so that could be where his “global” goals are rooted. You know, a nice, inexpensive, new place to exploit.