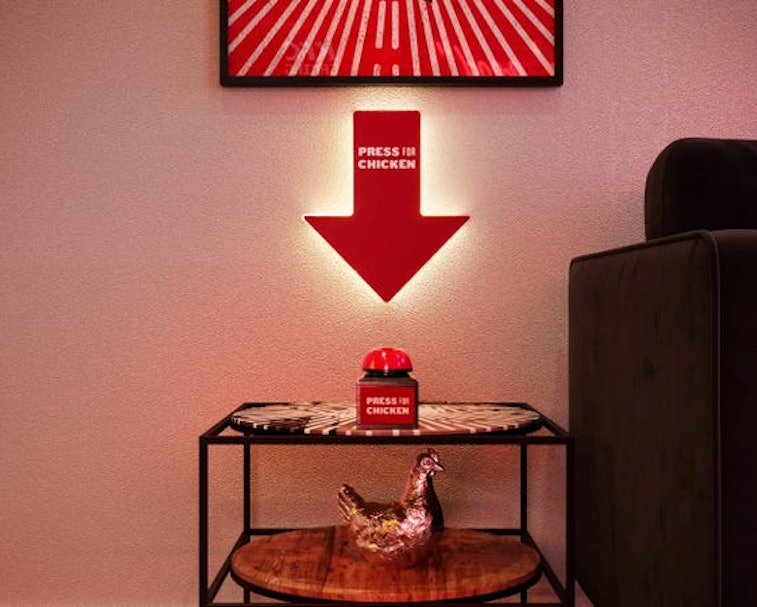 KFC is opening a fried chicken-themed pop-up hotel in London, United Kingdom. The hotel, open for just 11 nights during August, will include a “press for chicken” button in every room and offer guests up to $139 of chicken during their stay. Since rooms will go for $154 a night, we expect reservations to fill up quickly.

Marketing gimmicks are nothing new for the purveyor of fried chicken. KFC last year unveiled the KFConsole, a high-end gaming PC that includes a chamber for heating up chicken. Though the computer is purportedly made by PC maker Cooler Master, the company’s webpage promoting the KFConsole doesn’t offer a way to purchase it and there’s no word on when, or if, it will ever be made available.

The hotel is very real, however. KFC said in a press release that it will be called the “House of Harland,” and the hotel’s 11-day run is a reference to the 11 herbs and spices that go into its chicken.

Guests are limited to booking just a one-night stay for a maximum of two people, and only six of the eleven nights are actually available for anyone to book. The other nights are reserved for “select KFC guests,” and a KFC competition winner.

A whole lotta chicken — If you’re one of the lucky few who manages to get a room, however, you’ll be picked up and taken to the House of Harland in a black Cadillac that KFC calls the “Colonelmobile.” Upon arrival, you’ll be greeted by a “Chick In” clerk, and taken to your room where you’ll be able to begin enjoying your $139 worth of free chicken. Why two people would want to eat that much fried chicken, we don’t know. KFC says it imposed the limit to “prevent overconsumption,” but $139 in chicken seems way over that line already.

At least it’s all for a good cause. KFC says that all money raised from the promotion will go towards the KFC Foundation. And lots of chicken references — lots of them.

Other amenities offered by the hotel include access to a private cinema and a Hot Winger arcade machine. "Expect to see drumsticks in the detail, from bedding to wallpaper to an Arcade Machine and towel — fried chicken will never be far from your thoughts," KFC said in the release.

Gimmicks like the KFC hotel can help a brand feel fresh and cool even if its menu hasn’t changed much. Especially amid trends towards healthier fast food, KFC needs ways to keep young people excited about its offerings were are decidedly not healthy. And its appeals to gamers make them more apt to think of ordering some fried chicken goodness during their next XP grind.