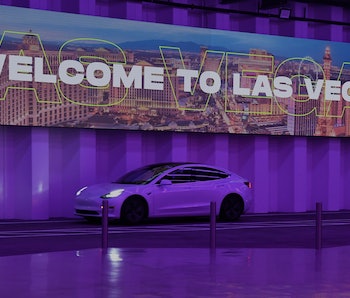 Despite underperforming and underdelivering by virtually every metric we can think of, Elon Musk’s subterranean public transit tunnel project, The Boring Company, continues to scam entire cities. In only a few years’ time, we’ve gone from Technoking promises of magnetically levitating transnational trains capable of 660 mph speeds to... an extremely claustrophobic 1.5-mile loop underneath the Las Vegas Convention Center that tops out at 35 mph. Oh, and lest we forget: no trains, just a sad parade of Teslas on Autopilot.

But that’s good enough for Vegas, apparently! Yesterday, Clark County commissioners unanimously approved expanding the Boring Company’s presence in the city to a 29-mile, 51-station tunnel system encompassing Allegiant Stadium, the University of Nevada Las Vegas, casinos, and hotels along the Strip. Clark County officials claim that, upon completion, the Boring system will be capable of conveying 57,000 people per hour and cost taxpayers nothing.

As Engadget notes, the Las Vegas Convention Center’s loop was initially promised to convey 4,400 passengers each hour, but currently averages around 576 people.

Ready to disappoint within six months — Speaking with Las Vegas Review, Boring Company President Steve Davis said he expects construction to begin imminently, with the first 5 to 10 stations available for travelers within the first 6 months. Following that, another 15 to 20 stations will be added to the system each year, with an eye to complete the entire project in 3 years’ time. So get ready, Vegas. You’ll be able to hop on that automated, underground lazy river ride in approximately 6 months... give or take another 12 months’ worth of inevitable delays.

How? Why? — To be totally honest here, the Boring Company’s continued streak of city contracts simply baffles the mind. Of course increased usage of EVs and public transit are great things, but there are undoubtedly so many better developers out there capable of delivering much more than a tube to slowly shove some Teslas down. The Boring Company is currently getting by on Elon’s name alone, and it’s hard to see how this could be seen as any kind of success. We’d love to be proven wrong, but when it comes to Boring... well... that has yet to occur.

More like this
Jackson Chen
Sep. 15, 2022
Tech
Unagi goes all in on subscriptions, scraps premium Eleven model
Jackson Chen
Sep. 17, 2022
Tech
Zero’s long-range e-motorcycle is a beast on and off the road
Will Gendron
Sep. 16, 2022
Design
Campworks's electric camper is an off-grid powerhouse