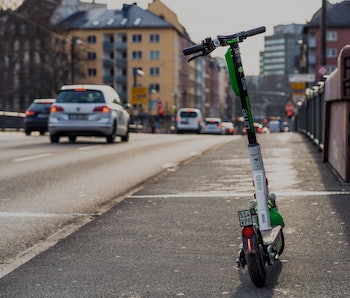 Lime is bringing its electric scooters back to Redmond, WA starting March 1st. The startup had pulled its scooters from the streets during the cold winter months when ridership is lower. Redmond is most well known for being home to Microsoft.

E-scooters are apparently quite popular among commuters in Redmond, with Lime telling GeekWire that 60 percent of rides in 2019 involved a connection to or from work. Companies like Lime argue that their scooters are environmentally friendly because riders use them in combination with public transit, which is considered one of the most sustainable forms of transport.

Uber and Lyft, on the other hand, have faced pushback because most riders take them solo, meaning they're much less efficient for moving people than a large bus or train car. As a consequence, ridesharing startups have also been blamed for increased congestion and pollution in cities around the world

The concept of last-mile transport — The type of transportation that Lime is promoting, where commuters use multiple methods to reach their final destination, is commonly referred to as “last mile” transport. Scooters aren’t great for going more than 1-2 miles, but are instead ideal for ferrying commuters between their front door and the nearest bus or train station. One hiccup is that scooters break down often, a problem that startups have been trying to address as they seek to make their businesses profitable.

Still, many cities around the world either regulate scooters heavily or have banned them altogether. The scooters often end up blocking sidewalks, causing problems for individuals in wheelchairs or with other mobility concerns. They're also just fairly dangerous as most riders don't wear helmets as recommended; the scar on my face is evidence of this. But I love to shred, so no regrets there.

More like this
Jackson Chen
Sep. 15, 2022
Tech
Unagi goes all in on subscriptions, scraps premium Eleven model
Annie Rauwerda
Sep. 19, 2022
Culture
A ragtag community is keeping this aughts Wikipedia gadget alive
Jackson Chen
Sep. 17, 2022
Tech
Zero’s long-range e-motorcycle is a beast on and off the road