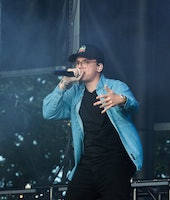 The decrease in suicide rates vs. projected numbers in the month after the rapper's track release.

Content Warning: This article contains discussions of suicide and self-harm.

In 2017, the verbose rapper (and avid Pokémon fan) Logic released a track called “1-800-273-8255” centering on someone overcoming suicidal urges, in part through calling the Suicide Prevention Hotline’s phone number (hence the title). The song was pretty successful at the time, reaching number 3 on Billboard charts and earning Logic performances of the single at both the 2017 MTV VMAs, as well as the 2018 Grammys. But one of the song’s biggest successes was only recently highlighted in a scientific observational study published in The BMJ. The research seems to indicate not only an increase in hotline calls but a noticeable decrease in suicide rates for the month following the song’s release.

While there are self-admitted potential caveats to the study, it does indicate support for something called the Papageno effect, which is a hypothesis arguing that media stories of overcoming suicidal depression can in some cases be an effective preventative measure.

Finally, a good use for Twitter — To collect data, the Medical University of Vienna team behind the study monitored Twitter posts over a month’s time span for posts related to the suicide hotline. They found that, in the 34 days following the song’s release, as well as Logic’s performances at the VMAs and Grammys, there were an additional 9,915 calls to the National Suicide Prevention Lifeline — 6.9-percent more than estimated. What’s more, they counted 245 suicides during that same time span, or 5.5-percent less than projected.

The only thing more surprising than those numbers is the news that Twitter actually benefitted someone for once.

Creative methods to reach new demographics — While more data is obviously needed before hard conclusions can be drawn, it’s certainly encouraging news for suicide prevention techniques. It also underscores the need for more innovative ideas on how to reach at-risk individuals and demographics that may otherwise miss more traditional outreach.

The research team argues that their findings “emphasize the potential population health benefits of working creatively and innovatively with other sectors, such as the music and entertainment industries, to promote new impactful stories of help-seeking that resonate with broad audiences.” Any good news on this front is welcome, as far as we’re concerned.

If you or someone you love is struggling with thoughts of suicide or self-harm, there is help available. The National Suicide Prevention Lifeline operates 24/7 and can be reached at 1-800-273-8255. You can also text Crisis Text Line at 741741.

More like this
Annie Rauwerda
6.17.2022 6:00 PM
#Krissed
Getting #Krissed is TikTok’s answer to the classic Rickroll
Will Gendron
6.14.2022 7:18 PM
Culture
Rogue beaver guts Canadian town’s internet after gnawing through a tree
Will Gendron
6.22.2022 10:15 PM
Brain Power
They did surgery on a locust's brain for cancer research