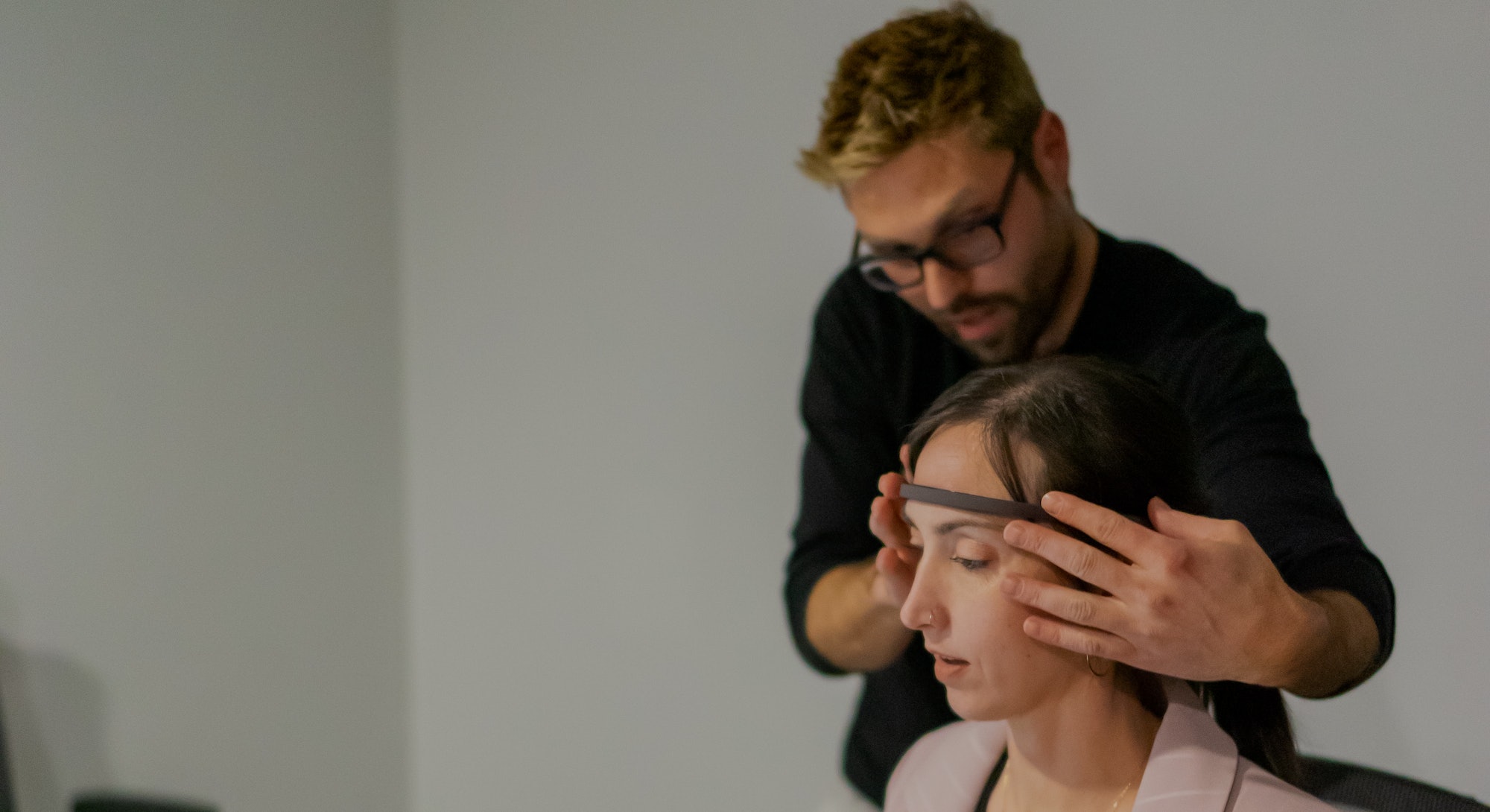 In a 13th-floor conference room in downtown Oklahoma City, Landon Whitt is attempting to read minds.

A 35-year-old with black frames and a sandy-brown highlighted coif, Whitt professes no psychic abilities. He is a realtor, the CEO of OKCREAL (“Your Top Team in Oklahoma Home Buying!”). And on this late-February afternoon he is showing off — to a hired documentary camera crew, a curious marriage and family therapist, two willing test subjects, and the press — homebrew technology he says will someday help him read your brainwaves to help find you the perfect home.

It sounds like science fiction, something you’d see in eerie futuristic shows like Black Mirror, and it’s hard to imagine such technology actually working. On the face of it, the technology comes across as weird and a bit laughable; the less generous would say it smacks of scammy pseudoscience. But, Whitt insists, the system he’s developing gives homebuyers a glimpse into how their subconscious is reacting to a home. And, at the very least, those he’s tried the tech out on seem to appreciate it: “Most of them think it’s just the coolest thing ever.”

Whitt darts from one side of the room to the other as he sets up a beta test involving a Muse electroencephalogram (EEG) device, which detects and measures the activity of your brain, and an Oculus Quest 2 VR headset. Today’s subjects are recent customers of his, Cara Brust and Sara Abolhosn, a local married couple who seem bemused but eager to participate in today’s demonstration.

“Okay Cara, I need you to leave the room,” Whitt says. “We don’t like the couples to know what the other is saying until the tests are done. This is going to open new doors for your relationship because you’re both going to walk out of here knowing how your brain subconsciously responds in different environments.”

As Cara steps into the hallway, Whitt adjusts Sara’s Muse headband. On his tablet, a ghostly image of her brain appears, each lobe lighting up green as the device calibrates. Until he can build his own application, Whitt is using several different apps to get the results he needs, including one called Opti Train, which is used to train athletes.

Whitt shows Sara the first of two rooms via the Oculus headset. It features a wide-open white living area with soaring cathedral ceilings, a crackling fireplace, huge windows, and a staircase leading upwards. “Oh, I like this room. It looks really inviting,” she says as her brain image starts lighting up yellow and red, mostly in her frontal lobes.

Ten seconds later, the image changes to another room. This one is small, closed off, and rather dim. It’s got ’90s taupe walls and tight corners. “No, I don’t like this at all,” Sara says, her brain lighting up in different areas.

Cara has the same outward reactions when her turn comes. She too says she loves the big, bright space, but calls the smaller room “hell,” akin to her first apartment.

Though the couple seems to agree, their brains have different stories to tell.

Though the couple seems to agree, their brains have different stories to tell, based on the regions that became engaged while looking at each space.

“This is just a beta test, and we don’t really understand all this technology just yet,” Whitt says. “But I will tell you this: Cara’s mind was very open to discussion in the second space, which was designed to look like a small bedroom, even though her verbal testimony was quite different from what our scans showed.”

Cara is surprised that the emotional center of her brain lit up at the sight of the “small bedroom,” but she offers that she associates such spaces with communicating with her partner. “Yeah, I talk her ears off,” Cara says of their bedtime rituals. “Sara just wants to sleep.”

Whitt is pleased, and pops a bottle of bubbly to share with the room. “The test was a staggering success,” he says. “I brought a bottle of Champagne because this was a landmark moment in my journey.”

Whitt’s interest in brainwaves began during his childhood in Austin, Texas. One morning when he was 6, his brain began having focal seizures, and doctors studied him to determine what was happening. The doctors put him on epilepsy medication for two years, which he hated, until they did another brain-scan test that used strobe lights.

“I remember laying on the cold medical table at 8 years old and feeling my mind begin to drift into excitement,” he says. “And it was at that very moment that I remembered how much I hated medication. It was at that moment I regained conscious control and simply just enjoyed the strobes without allowing my mind to wander deeply into ecstasy.” He says the strobe activity didn’t cause his brain to seize, so the doctors took him off the medication.

Although he studied kinesiology in college, Whitt became a realtor, and after hundreds of home tours with buyers, he wondered if there was a way to actually see what customers were actually thinking. He consulted with Tre Azam, founder and CEO of MyndPlay, a U.K.-based brain tech and media company that specializes in brainwave and sensor technology, and started experimenting with EEG headsets in 2018.

“We thought that it would be just like taking everybody on a tour, and the agents would follow with a tablet, and give them an assessment when they’re done,” Whitt says. “But that proved to be a lot harder than we thought. Because when people walk around, their muscles actually cause interference with the signal.” That’s why, for now, he’s doing his experiments in controlled environments.

Using the subconscious to market to consumers isn’t a new idea. In How Customers Think: Essential Insights Into the Mind of the Market, author Gerlad Zaltman of Harvard Business School, says that 95 percent of purchasing decisions are driven by unconscious urges, and emotion is the strongest of those urges. However, actively watching a buyer’s brain as they contemplate homes to buy isn’t mainstream by any stretch of the imagination. And experts aren’t entirely convinced.

“Brain scans and brain maps can serve a wide range of purposes, from improving your mental health through neurofeedback training to identifying your path to successful recovery following a traumatic brain injury,” Rachel Ragsdale co-founder of the Denver-based mental healthcare facility and neurofeedback Braincode Centers. “However, a brain scan likely won't serve much of a purpose when you're deciding on a big purchase like a home.” Muse itself says that its headset isn’t meant for in-depth brain scanning, but for meditation purposes.

It is true that brain scanners can predict decisions, but those decisions are often not very complicated. One study from Nature Neuroscience found that such scanners could anticipate people’s decisions roughly seven seconds before the study participants were even aware of making those choices. But those participants were deciding on whether to press a button with their left or right hand — nothing even close to choosing a place to live.

“The purpose is to create an environment where humans feel comfortable opening up and being vulnerable.”

Rich Hakim, a neuroscientist graduate at Harvard Medical School, says he doesn’t think the technology is at a point to effectively track brainwaves of homebuyers. “If you want to do this in a pretty controlled way that’s of interest to the community of real estate agents, I think that’s a useful tool, and you should go for it,” he says.

“Maybe if he gave it a year to build some deep convolutional neural network, sure, but it’s kind of nonsensical to think that you’d be able to use an EEG like that in a real environment,” he adds. “This kind of technology still has a long way to go as far as being useful for saying, ‘Okay, your brain hates this room,’ or ‘Your brain loves this room.’”

Whitt knows the limitations of the technology. However, he sees the tech as the first step in helping realtors and homebuyers narrow down home choices that are suited to them, both consciously and subconsciously.

“Most of the people who tell me I’m wasting my time are people in the real estate industry who have a vested interest in the system remaining unchanged,” he says. “If they are unbiased, the way I present data is accepted without question. My approach is not to decide what the readings are, but to provide the data in an easy-to-understand format and, together with the customer, decide how we are going to use it.”

To Whitt, the technology isn’t a simply a marketing gimmick.

When I bring up the skeptical experts, Whitt replies that his program is not designed to “make scientific breakthroughs.” He adds, “The purpose of my work is to create an environment where humans feel comfortable opening up and being vulnerable about what emotions they are feeling during the home tours. The brain electrical activity that we collect and map is just a clue into what the person might be thinking.”

To Whitt, the technology isn’t a simply a marketing gimmick — it’s something he truly believes will result in better lives and better relationships. His ultimate goal? “A happy home for as long as possible.” He says his next step is to build his own application that will streamline the experience for him and other agents. He envisions a future in which his scanner is used by agents and homebuyers everywhere.

“Rather than scrolling endlessly through Zillow, we’ll be able to pinpoint home features people prefer,” he predicts. “This will transform the home-buying experience.” Whitt, for one, can’t wait for that day to come: “The world is changing rapidly, and it’s a beautiful thing.”