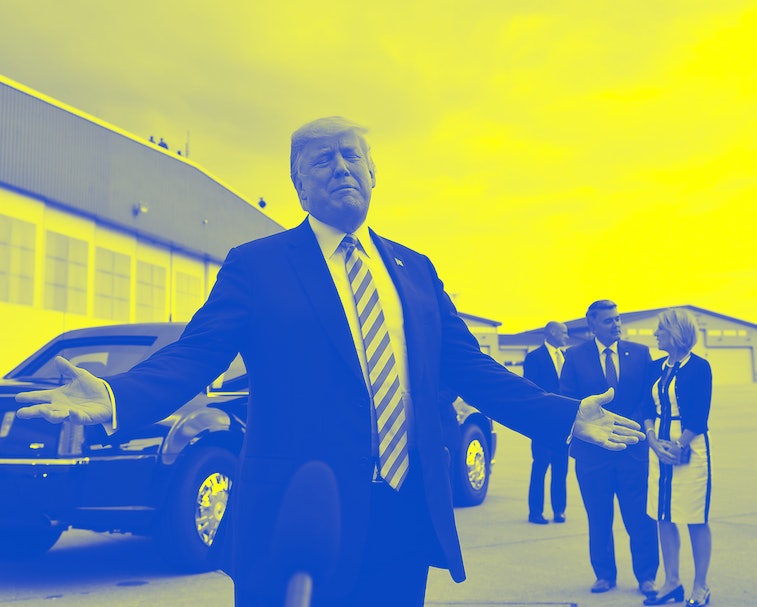 Former President Donald J. Trump has been ousted from Facebook, Twitter, and other social networks for about four months now, so last week he launched a personalized feed on his website in an attempt to speak to the masses. It turns out Trump’s silly little blog (note: that’s not the official name) hasn’t been attracting much internet traffic at all.

The Desk of Donald J. Trump has seen just over 212,000 “engagements” since its launch last week, according to data compiled by NBC News and BuzzSumo, a social media analytics company. BuzzSumo defines engagements as backlinks and social interactions such as likes, shares, and comments across other social media channels.

Hundreds of thousands of engagements are still more than, say, my personal Twitter account receives, but it’s small fries in comparison to Trump’s social media presence of just a few months ago. That’s good news for those of us concerned about the former president’s penchant for spreading lies and general misinformation.

Nothing much to see here — Trump has teased around the idea of creating his own news feed many times over the years. After all that hype, his new blog-social-media-hybrid is something of a letdown.

In short, Trump hasn’t made it very easy to spread his messages across the internet. No wonder his engagement numbers are so low. Evidence, indeed, that de-platforming works.

The social media megaphone — Trump’s internet power was very much tied to his social media presence. For now, at least, the feedback loop to which Trump became so addicted continues to be muzzled by the largest social media companies. Twitter has gone so far as to ban The Desk of Donald J. Trump’s account on the site. These de-platforming strategies have successfully kept Trump’s noise to a minimum since early January.

Trump’s new site is even more limited in its functionality than similar alt-social platforms, like MyPillow guy Mike Lindell’s “Frank.” Banned alt-right figureheads are flocking to independent ventures to spread their vitriol and lies — and they’re finding that it’s more difficult than they thought to do that without the help of Twitter and Facebook.

We’re thankful for how enjoyable social media has become again in the wake of Trump’s bans — but we’re also aware that he could choose to join another network like Parler or Frank at any time. But, frankly, they’re welcome to him. If we never see him on the platforms we use again it’ll be too soon.