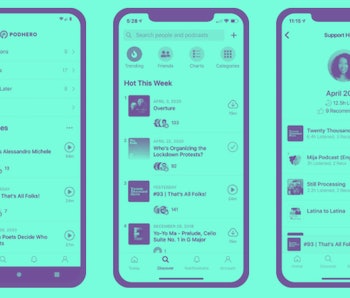 The new service, which launched last week, charges listeners $5.99 per month for access to over a million podcasts from more than 30 countries. It’s the latest project from the creators of Swoot, last year’s “social podcasting” platform that attempted to make podcast-listening more of a social-networking experience. Podhero incorporates some of those social features into its app.

If Podhero’s premise is sounding familiar to you, you’re not alone. Remember Luminary? The company operates on a similar premise, albeit one that centers less on its creators and more on generating overall profits. Luminary hasn’t seen much success in its first year.

Podhero hopes to affect change in the podcast industry by moving the focus back to creators. Around 97 percent of podcasters make $0 from their shows, according to Podhero’s estimates. The company’s noble cause might end up being its downfall.

No more ads — The traditional podcasting model uses in-episode advertisements to support the show and its creators. Podhero sees this model as one of the largest hurdles to success for a podcast. Advertisers are very picky about who they’ll pay to run their ads, and revenue from those ads is unpredictable.

It only takes a quick scan through Podhero’s announcement post to understand that Nick Curley, the new platform’s CEO, is not a fan of podcast advertisements in general. The hatred here goes beyond the ad ecosystem: Curley also dislikes hearing ads while listening to podcasts.

“I fucking hate ads,” Curley told Wired in a recent interview. “Podcast ads make me want to dive through my plate glass window.”

Not like Patreon — Podhero’s business model will draw immediate comparisons to Patreon. Both services focus on allowing creators to do their thing while also getting paid.

But Patreon creates headaches for many podcasters, requiring shows to make extra content as subscriber perks. Because Patreon takes an 8 percent cut, creators end up charging more for that extra content. Listeners aren’t usually eager to pay a separate fee for each podcast they listen to.

Podhero works around these issues by charging just one monthly fee and paying creators for their existing content. Only one dollar of that monthly subscription fee goes to the company itself — and that dollar is optional.

Can it survive? — Creators deserve to be paid for their work. We’re all for services that make that process easier, especially in 2020, when it’s more difficult than ever to pay the bills.

That being said, Podhero’s utopian vision of podcasting is going to be very difficult to maintain. Podcasting is seeing a boom right now for the very fact that it’s free. Just boot up Spotify or Apple Podcasts and start listening. It’s not going to be easy for Podhero to convince listeners to switch to a subscription-based service, especially when almost all of its offerings are available elsewhere. Podhero doesn’t have many exclusive shows, either.

And then there’s the overhead: how can Podhero pay its staff when subscribers are only paying the company a dollar per month? Some users might even opt out of that dollar.

The ideas behind Podhero are sound. Curley and his team are right: podcasters deserve to be paid better. But with the way Spotify is dominating the industry now, Podhero’s business model is just a little too good to be sustainable.