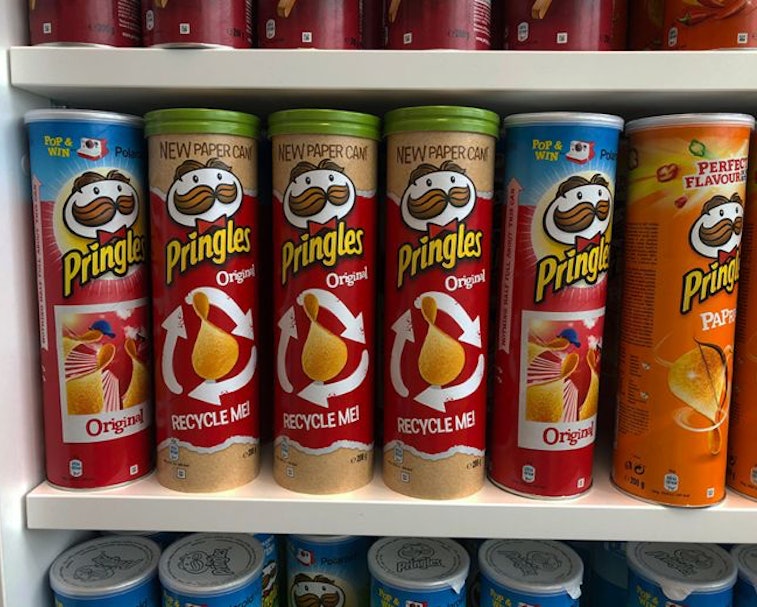 Pringles tubes are "the number one recycling villain," according to the Recycling Association in the U.K. To address that, Pringles' maker Kellog's is testing a new can across the pond that replaces the metal tear-off lid with recyclable paper or plastic alternatives. It says that the can will still release that distinctive "pop."

The main reason why Pringles tubes are hard to recycle is because of their complex construction. Each can consists of a metal base, plastic cap, metal tear-off lid, and foil-lined cardboard sleeve. To properly recycle the can, consumers or facilities have to tear that mixture apart for sorting.

It's about time — The newly redesigned can is an improvement because about 90 percent of it is made of paper, according to the Recycle Association. The organization, however, says that leaving in the plastic cap is still problematic because consumers may leave them behind — and the cardboard can includes a thin plastic barrier on the inside to seal the interior and protect the chips against oxygen. It's unclear how easily the can could be recycled considering that.

Recycling in general is a sticky issue of late because, due to various issues, much of the plastic that's thrown into recycling bins doesn't actually get recycled and ends up in landfills anyway. The best solution is avoiding harmful plastics altogether in favor of paper that degrades without releasing harmful chemicals.

One idea to completely resolve this problem would be for people to... stop eating Pringles?

Still, it's positive to see that one of the worst-designed food containers is finally getting a redesign. It seems like Kellog's should have done this earlier. The company hasn't said if the new design will be rolled out more widely.