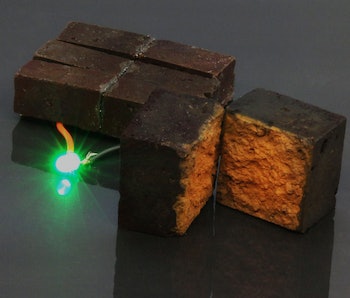 Researchers at Washington University in St. Louis are trying to fundamentally change your impression of the good ol' red brick. Yes, the red bricks often used in construction material, the ones that appeared in famous nursery stories and poems about the three little pigs and the big bad wolf. Those red bricks.

According to the university's research, these conventional building blocks can be converted into charging sources that can power literal batteries and lights. Imagine using cheap bricks as electricity units. It could alter how we approach building space.

"Conversion" is the name of the game. Through a process of modification, these red bricks can be turned into "smart bricks," according to chemists. Normally, red bricks are known for their thermal mass but the idea that electricity can be conducted through these blocks hasn't been successfully demonstrated before — until now. As pictured below, these scientists were able to directly power a green LED light straight out of several bricks. It's simultaneously bizarre and brilliant.

How does it work? — At its core, the study involves converting red bricks into "supercapacitors." This is a complicated process best explained by Julio D'Arcy, the assistant professor of chemistry at the Washington University in St. Louis. Here is how D'Arcy turned simple and boring red bricks into conductors:

In this work, we have developed a coating of the conducting polymer PEDOT, which is comprised of nanofibers that penetrate the inner porous network of a brick; a polymer coating remains trapped in a brick and serves as an ion sponge that stores and conducts electricity.

The red color in bricks is super useful as the pigment helps initiating the polymerisation reaction. The entire process could help with emergency lighting, according to the researchers. "We envision that this could be a reality when you connect our bricks with solar cells — this could take 50 bricks in close proximity to the load," D'Arcy explained. "These 50 bricks would enable powering emergency lighting for five hours."

The architectural advantage — The entire scientific project is currently limited in scope, which shouldn't surprise anyone. But if this is taken to a more commercial level, it could lead to a major change in how we perceive and approach building architecture. Offices, houses, classrooms, and more almost always are made up of red bricks among other construction matter. Turning these buildings into electricity units would be a practical way to use space. As long as it's safe — like this boat that runs entirely on hydro and solar energy — count us in.