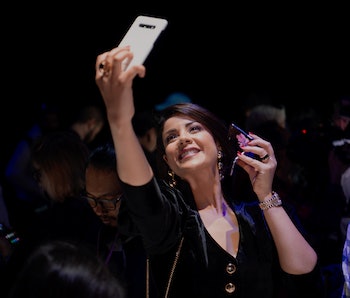 It's happening for the first time: Samsung's Galaxy Unpacked event will go live on major platforms like TikTok, Twitch, and Reddit, according to the company's press release. You can watch the live stream on January 14 at 10:00 a.m. ET. All you need to do is grab a link for @SamsungUS on Twitch, @Samsung on TikTok, or check it out on Reddit where it will run on r/SamsungMobileUS.

January 14 is the day when Samsung is expected to reveal its Galaxy S21 gadgets, Galaxy Buds Pro, and other devices. It's not just Reddit, TikTok, and Twitch that have been added to the list of live views — you can watch Samsung Unpacked on Samsung's own website (you'll have to make a reservation, though) or YouTube.

On top of this announcement, Samsung is expected to collaborate with Twitch Rivals on a year-long partnership. This collaboration, according to Samsung, "secures Samsung Galaxy as the exclusive mobile device partner of the leading tournament series for Twitch streamers."

Bringing Unpacked to new virtual audiences — Samsung is known for creating impressive, slickly coordinated events and product launches whenever it unveils its latest flagship phone and other devices (except for the faux musical it hosted at Radio City Music Hall, which ran too long and for which it got panned). Truth be told, witnessing unveilings in person is a lot more entertaining than it is online. But with the COVID-19 pandemic, in-person events aren't exciting right now, they're terrifying, and understandably off the cards (unless you're, you know, storming the Capitol).

Not one to give up, however, Samsung has turned to massive networks like TikTok, Twitch, and Reddit to carry on its show. This kind of adaptability could pay off by introducing Samsung products to bigger crowds and communities online (cross-posting on different subreddits alone brings good exposure for the company).

This Thursday, Samsung is expected to launch the Galaxy S21 in various sizes — including a 6.2-inch smaller S21 alongside larger 6.7- and 6.8-inch counterparts. Noise cancellation lovers will also get a chance to check out Galaxy Buds Pro, which might make you rethink your love for Apple's AirPods, and should give Samsung users a solid first-party solution that doesn't resemble something you'd put in a taco.