Care about your carbon footprint? Cut down on HD streaming. 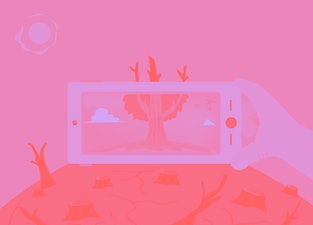 Given the stark difference, these scholars advise people to stick to standard definition — which is already hard to tell apart from high definition if you're using a small screen. By doing so, you might be able to help lessen emissions and make the world a slightly healthier place. Emphasis on "slightly."

What the study says — The report notes that emissions from digital technology — think internet services, data centers, and other digitized activities — end up creating emissions that make up somewhere between 1.4 to 5.9 percent of the cumulative total of carbon emissions. Of course, that's not as intense as other sources. But if nothing else, it could be worth trying a simpler lifestyle for the mental ease it brings. For example, the scientists suggest that music streaming is environmentally friendly when it's audio alone. You can ditch the video if you're not interested in it.

The researchers also suggest that consumers keep their smartphones for four years instead of simply two. Buying a secondhand phone isn't a bad idea either. Transfering computational energy to the cloud also conserves energy, according to the report. These little steps could save at least five percent of the emissions from these activities.

Still, streaming isn't the main problem — Earlier in 2020, there was a claim floating around the internet that watching 30 minutes of Netflix was the equivalent of driving nearly four miles. It was quickly debunked as analysts noted that while web activities often do burn fossil fuel (though not always), they are nowhere near a gas-powered vehicle burning energy. Or how much energy Exxon swallows whole.

Computing does require energy but streaming is not as computationally intensive as running a full truck down a highway or running a mass factory producing hazardous material. And while live-streaming is energy-intensive, it is not equal to gigantic data centers burning fuel or, again, a vehicle burning gas. Even the researchers of the study note that "digital tech is a small fraction of your emissions." The far more insidious contributors are flying frequently, burning coal, deforestation, nitrous oxide-emitting fertilizers, and other industrial and social level forms of negligence and disregard.

The primary takeaway of the Royal Society study is not to entirely ditch the internet — which doesn't seem possible, at least right now (not even for a secret Luddite like me) — but to give our consumption habits a thoughtful and reasonable makeover. As it has been continuously noted, full-scale overhauls by corporations, not lone consumers, will be able to tackle climate change. If that ever happens.