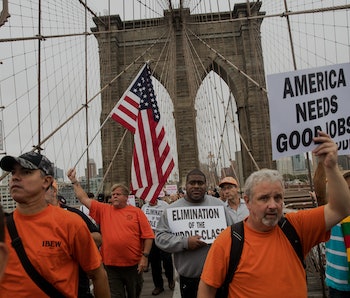 Since 2017, a strong cohort of Spectrum workers has been on strike against the company, citing grievances about benefits as well as inadequate field equipment that made their jobs unnecessarily difficult. Today these workers are building their very own internet service in New York City, Ars Technica reports.

It's aptly called People's Choice and costs users somewhere between $10 to $20 per month, with profits and advantages going back to users and not powerful players like Spectrum. "No more cable company ripping you off," the strikers say, "and as an owner [of People’s Choice], you have a vote in policies like data privacy."

The People's Choice Communications describes itself as a social enterprise run by Spectrum employees and created by the members of the Local Union 3 International Brotherhood of Electrical Workers. PCC's mission is refreshingly uncomplicated: connect people to the internet without the cumbersome profiteering and data hogging of corporate entities like Spectrum and Charter. "We are the workers who built a large part of New York City’s Internet infrastructure in the first place," the group states. "We built out Spectrum’s cable system, until in 2017, the company pushed us out on strike by taking away our healthcare, retirement, and other benefits. It’s now the longest strike in US history."

Internet for the people, by the people — PCC's internet system involves a mesh network of antennae, according to Gizmodo. Two rooftop antennae have been installed at two schools in the Bronx, connecting thousands to the web in the borough. On top of that, the group has also proudly provided wireless connectivity for domestic abuse survivors with disabilities, "connecting 121 units” so far.

According to Gizmodo, a "few dozen" Spectrum strikers are involved in installing these connections in various points of the city with plans to scale this project at larger levels. People’s Choice is similar to NYC Mesh which installs internet services in financially disadvantaged neighborhoods in the city.

The PCC initiative could not have arrived at a better time. In a city where over 1.5 million people don't have access to mobile connectivity or broadband service, projects like People's Choice have the potential to bridge the gap between those who can afford reliable internet and those left behind. If you're in the city and want to expand the PCC's ISP network into your area, you can fill out this form and get in touch. The group emphasizes providing access to people in affordable housing, co-op projects, shelters for the homeless, and other unserved areas in New York.