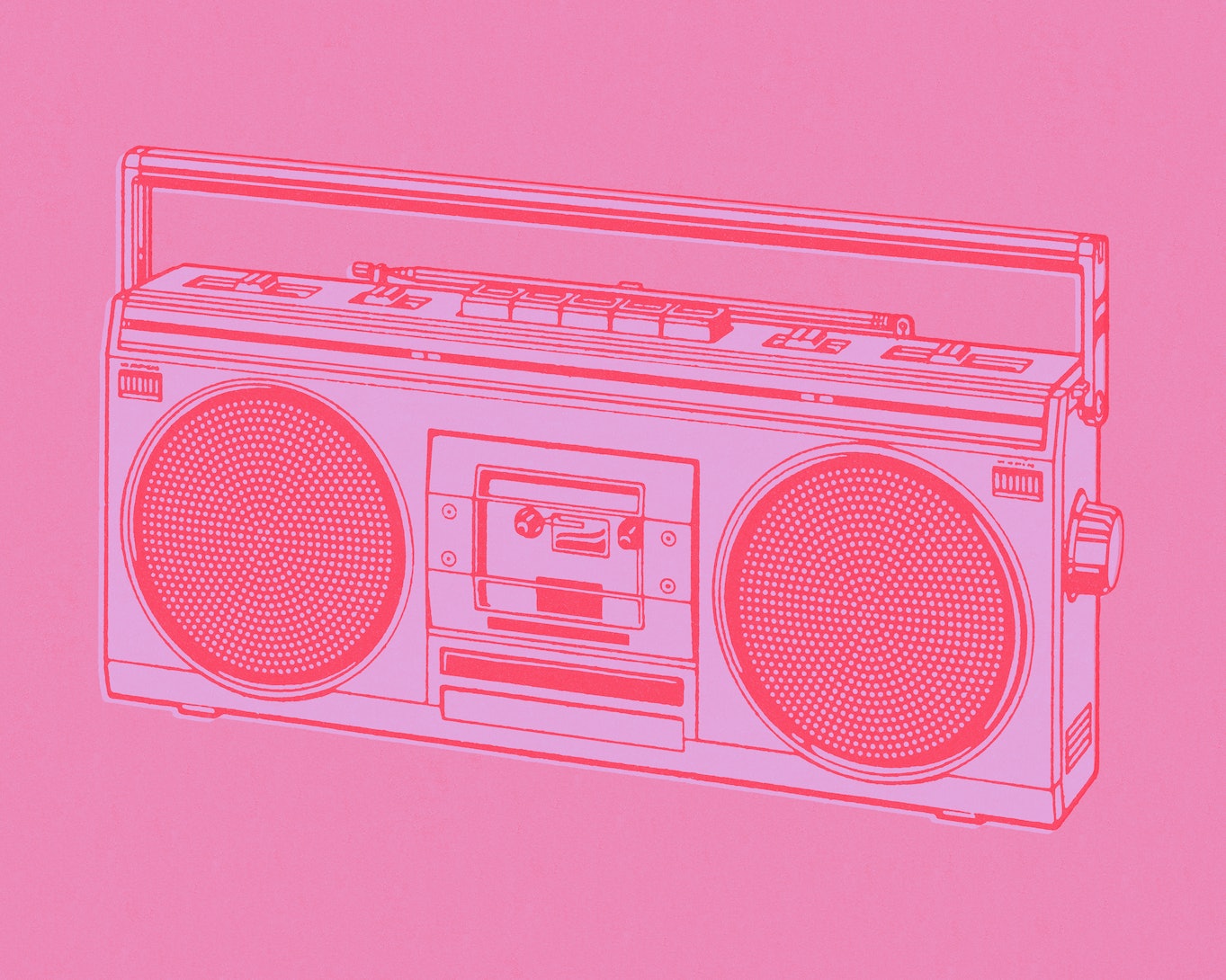 The song, which had been posted that morning, had triggered a notification for each of their 119,000 Spotify followers, urging them to check it out. It also appeared in the “Release Radar” — an auto-generated playlist that populates with new releases from artists in your library — of their over 1 million monthly listeners.

Right away, Brad and Jason were confused. They hadn’t greenlit a new single, and the cover art, a hi-res stock photo of two hands clasping, was a far cry from their usual two-tone, film-grain aesthetic.

Baffled, they listened to it and even more red flags went up. It was obvious, at least to them, that this wasn’t a TV Girl song. Instead of the hypnotic bedroom pop the band built its following on, this was generic, sanitized EDM. Like the cover art, it felt stock — less like an actual song and more like background music for a YouTube ad.

They had questions. Had someone hacked their account to troll them? Was a scammer making money by impersonating their band? And if that was the case, why a mid-sized band like TV Girl? Why not Billie Eilish, or Post Malone?

It wasn’t until Brad and Jason looked around online that they realized they were a part of something much bigger. The rogue single was far from an isolated incident. Rather, it was a part of an industry-wide hijacking — one that had targeted at least a dozen artists that week alone.

Why not artists with bigger followings?

Searching through online music forums, they managed to find 11 other artists who’d unwittingly uploaded EDM tracks to their Spotify pages, all on either June 25th or 26th, all with the same oversaturated, flowery-aesthetic cover art.

Among those targeted were some big names in the indie rock scene: Foxygen, Frankie Cosmos, Pond, and Crumb were all victims. Perhaps most notably included was Her’s, a British duo whose quick rise to fame was abruptly stopped short last year after both members died in a car crash.

When Brad and Jason, who aren’t on a label, contacted Spotify directly to try to resolve the issue, they got caught up in a lot of red tape. Apparently, because they don’t own a copyright on the name “TV Girl,” technically anyone can upload a TV Girl song. Spotify told them they can’t take down someone else’s music without “just cause,” and when asked if they could at least take the song off the main TV Girl page, they said they were working on it. All told, that ended up taking two weeks.

To Brad and Jason, it felt like Spotify was dragging its feet. “I don’t see why they can’t just take them all down,” Brad said, adding that if it happened to a bigger artist, a Lady Gaga or a Katy Perry, he was sure it’d be taken down immediately or would never have been able to happen in the first place.

Next, they got a hold of their distributor, CD Baby. While they weren't able to remove the song that way, they did manage to find out how the song was uploaded: through a company called La Cupola Music, which is based in Barcelona.

All the while, the band dealt with the fallout. Brad said he "had people tweeting at us saying, 'What the hell’s up with this new TV Girl song? It sucks, I’m crying. Frowny emoji.'”

Online, he put it more bluntly. In a scathing Instagram post, Brad wrote that "the amount of horrified fans asking if our new song 'grasp' is the new direction we’re going in compels me to say: this is not our new song ... I’ve already complained to Spotify but those callous dead eyed bureaucrats are unmoved by the plight of a lowly band like TV Girl as long as they can pad out their diseased coffers with a few more microstreams."

Eventually, Spotify corrected the issue by making a second TV Girl page and moving the single there. But for the two weeks it remained up, someone had made money off the account, and Brad and Jason hadn’t been able to do anything about it. They couldn’t help but feel like they’d been scammed.

As it turns out, schemes like these are actually pretty common in the music streaming industry. Cherie Hu, a music/tech writer and author of the newsletter Music & Water, says that as a Spotify user, she runs into them often, usually on her Release Radar or Discover Weekly playlists.

According to Cherie, the blame lies more on the music distributors than the streaming platforms themselves. When an unsigned artist or a small label wants to put a song on Spotify, they have to go through a third-party distribution service (like CD Baby) to get it done. It’s the job of these services to make sure the metadata’s up to snuff, check for copyright infringement, and upload the song to Spotify’s library.

Cherie thinks that what happened here was an error in the metadata. The number of different third-party distributors is high, she said, and each one has its own set of standards for the metadata artists are asked to provide. When those standards are low, often what it leads to is an incomplete picture when Spotify tries to identify an artist, or in this case, an altogether skewed one.

Keeping all this in mind, we can begin to piece together how the song made it to TV Girl’s artist page. It’s likely someone submitted it to a distributor with low metadata standards (La Cupola Music, in this case) under the name TV Girl, along with perhaps a dozen other songs under a dozen other popular artist names. When the distributor uploaded the song to Spotify, instead of creating a new artist ID tag for a new artist named TV Girl, it just used the existing one. As a result, when the song went live, it posted to the existing TV Girl account — the one with over a million monthly listeners.

Further complicating things is the fact that Spotify doesn’t actually delete songs from its library or create new artist pages — that’s left to the distributors. So by the time Spotify and La Cupola Music overcame the bureaucratic hurdle of coordinating to identify and resolve the issue, the song had already been live for two weeks and racked up thousands of streams.

That friction — between the distributors and the streaming platforms — is fertile ground for scammers, and they’ve found myriad ways to exploit it. Cherie said it’s not uncommon for scammers to upload bootlegged copies of popular songs to the original artist’s account and collect the royalties. Likewise, aspiring artists will sometimes post their own music to more popular accounts in hopes of finding an audience.

Schemes like these may seem hair-brained to some, but in reality, people do fall for them. All the time. For example, a week prior to the TV Girl incident, a scammer published a counterfeit single to psychedelic rock group Moses Gunn Collective’s account. Before the song was ultimately taken off Spotify, it made a big enough splash for this blog to make it their track of the day. The resulting duplicate artist page — the one Spotify created after realizing the mistake — quickly racked up over 30,000 monthly listeners.

What all this points to is a major flaw in Spotify’s distribution model — one that allows scammers to profit off an artist’s image for weeks at a time. From a small indie artist's perspective, that sucks. A Spotify page is often the most outward-facing part of an artist’s online persona, and they work hard to develop a certain set of musical and aesthetic principles that guide it. When that page is stolen from the real artists and all that work is undone, it can be frustrating, and even hurt their bottom line.

To Brad and Jason, the solution couldn’t be clearer: Find a way for artists to swiftly remove unwanted songs from their pages. Cherie echoed their sentiment, saying that “In spite of so much technological innovation, there are still so many obstacles artists face in terms of even controlling their identity on these services, and no real way to resolve them in a quick manner.” A series of exchanges with Spotify’s press team ended with its assurance that the issue was “very actively being worked on,” but some would say the wheels aren’t spinning fast enough.

In a rapidly evolving industry, where success is measured in minutes and hours, time is quite literally money. And to the artists who are already struggling to support themselves on the platform, every minute counts.