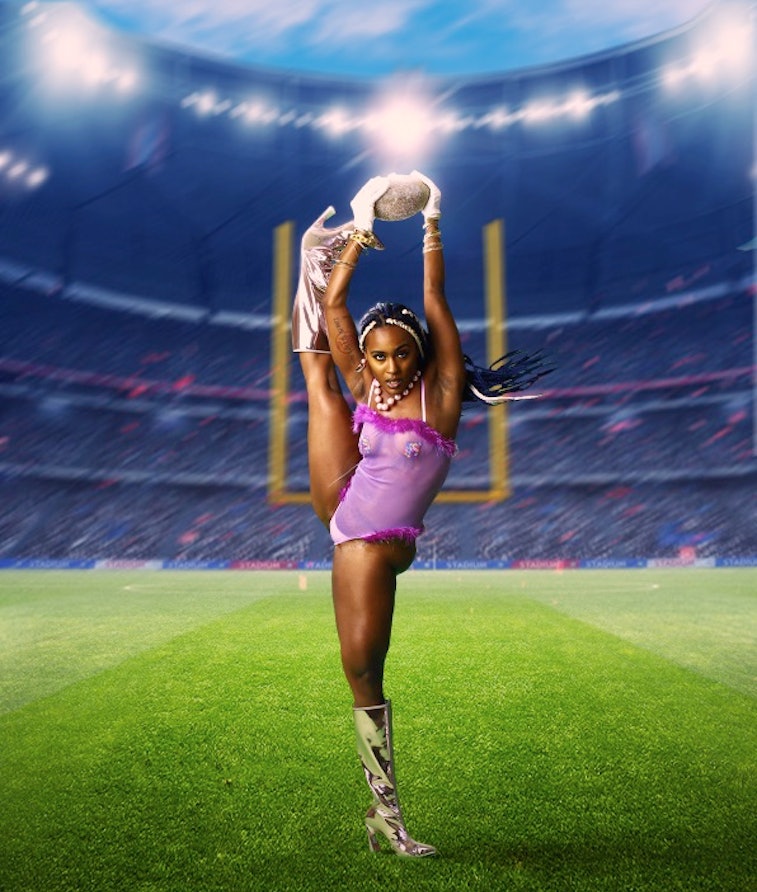 But this year’s show is attracting attention for more than its legendary line-up, as activists are speaking up about the event’s legacy of mistreating its dancers.

Last month, word began to spread that as many as 400 performers — “predominantly African American movers,” according to a widely circulated call for volunteers from a contract employee of the Bloc LA recruitment agency — were being sought to appear as unpaid performers on the field by show producer Roc Nation, the entertainment company founded by Jay-Z. (The 115 professional dancers, who will perform onstage, are being paid.)

Horrified by the Super Bowl’s attempt to employ Black dancers without pay in a show featuring politically-minded rapper Lamar, some dance industry insiders have decided to break their silence about the NFL’s policy on dance volunteers.

Leading the charge is California-based dancer and choreographer Taja Riley, who has performed — for pay — in Super Bowls with Beyoncé and Jennifer Lopez. Riley, the daughter of record producer Teddy Riley, blew the lid on the volunteer scandal in a January Instagram post.

The post garnered 12,000 likes and a slew of media attention from outlets such as the New York Times, the Guardian, and the Los Angeles Times. Now, with the backing of some of her peers, Riley has launched a full-fledged social media campaign to lift the lid on mistreatment in her industry. She’s using Instagram, where her @tajariley account has 111,000 followers, to try to get pay — and justice — for all this year’s halftime show performers.

Riley, who is Black, says that mistreatment is not a new phenomenon in the dance world. “The majority of jobs do not treat us well,” she says. “The respect level extended to dancers is nothing more than just a background piece or a moveable prop.”

In the wake of her post, followers DMed Riley with allegations that the Super Bowl halftime show had sought unpaid volunteers from the Black community for previous Super Bowl shows. “It’s unbecoming of where we are and where we should be with Black Lives Matter,” she says. “It’s a civil rights issue.”

Dancers believe that this moment of reckoning was only made possible by social media. “I think there's something to be said for dancers being able to connect when they’re not in a room competing for a job,” says staunch campaign supporter Liberty Cordova, an actress and singer from California who has danced professionally since the age of 17.

“On social media, they’re seeing each other as humans — instead of as competition to put food on the table or pay the bills,” Cordova adds. Riley says that dancers don’t usually speak out about working conditions for fear of being blacklisted and losing future work.

The campaign has been successful — to a point. In response to the controversy, Roc Nation offered volunteers (classified as “field performers”) $15 an hour, which pales in comparison to the reported $45 per hour and $715 show day fee going to the paid dancers. The new deal lacks start dates and hazard pay conditions, according to Riley, who also claims that performers were coerced into signing the new contract. (Input approached Fatima Robinson, the Super Bowl halftime coordinator, and Roc Nation for comment, but did not receive a response from either.)

In addition, six days after Riley’s initial post, performers’ union SAG-AFTRA issued a call for unpaid performers involved in last year’s event with The Weeknd — which also involved a large number of Black dancers — to apply for compensation from the organization. But given the union’s request for proof-of-attendance, and the 72 hours dancers were given to apply for pay before the statute of limitations on the claim ran out, the offer felt hollow.

“No one has any evidence, because they had to put stickers on their phones during rehearsals, so they couldn’t document they were there — and during the performance, everyone was in masks,” says Riley, who spread the word about the claims process via Instagram. “The odds are already stacked against them.”

Riley feels conflicted about the results of her campaign. “There is the small victory, seeing that they get paid, but there’s still this feeling of them weaseling out. If SAG-AFTRA approved the deal, it shows us they don’t care,” she says.

(Riley has an ongoing dispute with the union: She is one of several performers claiming to have received just six days’ worth of proper pay for Lopez’s 2020 Super Bowl performance, despite attending two months of rehearsals, and is part of an active claim involving SAG-AFTRA over this issue).

SAG-AFTRA released a vague statement saying that it “and the producers of the Super Bowl Halftime Show have met and had an open and frank discussion, and have agreed that no professional dancers will be asked to work for free as part of the halftime show.” (Input reached out to SAG-AFTRA, but it declined to comment.)

The official response to Riley’s campaign has left a bitter taste in the mouths of industry insiders, too. Devine Evans, California-based music producer and follower of Riley’s who has worked with the likes of Eminem and Rihanna, says he slid into the DMs of event coordinator Robinson to make his feelings known.

“We want to get rid of that little rock that the Super Bowl is hiding under and show how many people they aren’t paying.”

“She was making posts about supporting Black culture with a Black Super Bowl performance, and then they don’t get paid, so I called her out,” he says. Evans tells Input that Robinson, as the coordinator, should be held responsible for this mess and adds that he hasn’t received a response from her.

“They’re making insane amounts of money doing these shows,” he says. “For them to ask anyone to volunteer is insulting.” (Although Super Bowl headliners are unpaid, they stand to earn from the gig through increased popularity; for instance, Jennifer Lopez’s Spotify streams shot up 230 percent after her halftime appearance.)

Meanwhile, Riley is working with one of her followers, British choreographer and data manager Jack Fielding, to collect data on previous Super Bowl performances and shine a light on past mistreatment.

They’ve already unearthed some worrying findings. “We’ve seen a larger response from the African-American community, which makes sense since Beyoncé’s Super Bowl was almost exclusively Black dancers,” says Fielding, 25. (Beyoncé headlined the Super Bowl in 2013 and 2016). “If they’re not paying them, it’s not really diversity, is it? We want to get rid of that little rock that the Super Bowl is hiding under and show how many people they aren’t paying.”

Riley hopes her work will bring about significant change in the future, but she’s going to need help. “It’s still overwhelming for me. There’s so much work to do, and I can’t do it alone. Like it can’t just be me, you know?” says the dancer, who is juggling a number of professional gigs — including an upcoming film project — along with her campaign for justice. “I hope this encourages other dance artists to speak out.”