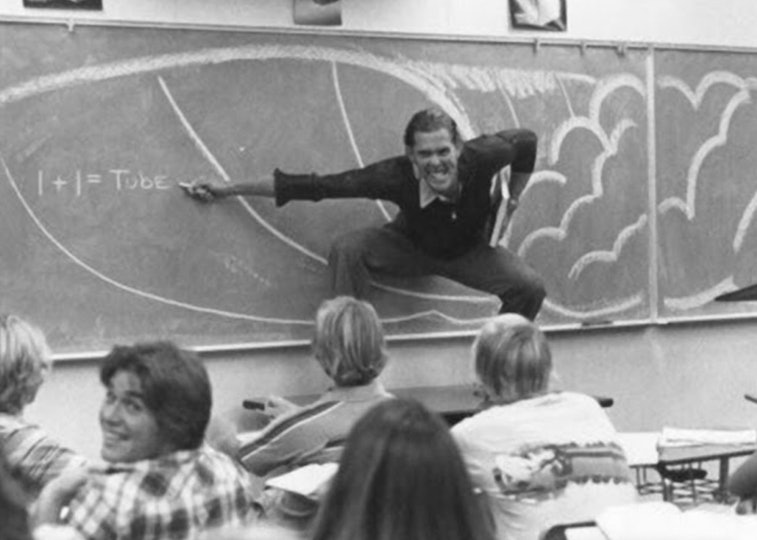 A photo of a California teacher demonstrating the physics of surfing has been bouncing around in the internet’s spin cycle for years. It shows a young teacher crouched on a table with a crazed smirk.

He’s in the middle of one of those classroom performances that are just as theatrical as pedagogical, one that makes a rousing performance out of nothing but the stale air of a high school classroom. Behind him is a chalkboard filled with a scrawled rip curl and the cryptic equation “1 + 1 = tube.” I wasn’t quite sure how that math worked — it seemed like it was either a pun on “two” or some profound new discovery in wave dynamics (is it a series of tubes all the way down?).

Tracking down the people behind old photographs is always a joy, and this one is just beautiful to me: The way certain letters in the penmanship are randomly capitalized in that 1970s way, the front row of mesmerizing mop tops, the black outfit that looks like it might be a bona fide wet suit, the pointy collar that’s been out of style for decades. I’m struck with a pointed nostalgia for my own teachers who pulled all the stops to bring excitement to the yellow-lit high school classrooms full of kids — teenagers who’d probably rather be out surfing.

Luckily, the tubular teacher is known and adored by many. Beneath a Reddit post, former students identified him as Marc Degen: “Math with Deegs was one of the few classes I wouldn't ditch,” one said. “Freaking love that guy.” Glowing memories of Southern California calculus classes trailed the photo’s viral online spread. But there were only crumbs of this “Mr. Degen” online — a Scholar-Athlete award in a 1975 Long Beach newspaper (he was a college swimmer with a 4.0), coverage of his surfing team’s wild success (he coached until 2015), and a few mentions in the school paper for Dana Hills High School, a sprawling campus built in the southern tip of Orange County in 1973.

A Dana Hills Class of 1981 Facebook page full of lively posts about four-decades-old jokes and memories brought me to Mr. Degen’s wife, who passed along his phone number with great joy. “I taught journalism for 35 years. How could I not love your message?” she wrote to me.

On the day I called Mr. Degen, he told me he, unfortunately, hadn’t gotten a chance to surf in a while. (He’s slowly getting back into it after he had two total shoulder replacements about two years ago). He doesn’t like being out of the ocean for too long: When he started his 40-year-long career as a math teacher at Dana Hills, he was an assistant water polo coach before becoming the head surfing coach. “I’ve always been kind of a water dog,” he said.

Mr. Degen can’t quite remember what class he was teaching when the 1979 surfing picture was taken (“Algebra 1, Trig, something like that”) but he does remember why he hopped up on the table: He had taken a liking to the yearbook teacher. When a student photographer came into his class, Mr. Degen wanted a picture that would impress Ms. Evans, his colleague crush.

“I ran out to my car and got my wetsuit, which I shouldn't have done. But I did,” he said. “And I obviously impressed the yearbook teacher, because we've now been married for 36 years.”

I thought the photo was great as it was, but knowing it was a love story? I was locked in. I asked whether or not this photo was the reason they’d started dating. Mr. Degen said they were right at the early stages of what would become an on-and-off relationship. About six years after the surfing pic, in 1986, they’d tie the knot. They have two adult children, and, according to Mr. Deegan, “the whole thing turned out amazing.”

“I obviously impressed the yearbook teacher, because we've now been married for 36 years.”

The photo did, indeed, end up in the 1980 yearbook, along with a (rather flirty?) caption explaining that Mr. Degen was simply “suffering an attack of ‘surfitis’ (salt water on the brain).”

The teenager in the front row who’s giving a goofy grin at the camera is Nick Simovich, one of Mr. Degen’s water polo players whose front-row seat was no accident. “At the time I knew him really well. And every once in a while I will run into him,” said Mr. Degen. Nick was a high school hotshot, Degen said. “You have no idea how many girls see that picture and go, ‘he’s hot.’”

Nick told me that Mr. Degen left a lasting impact: “He’s one of the people who inspired me to become a teacher.” Nick sent me a recent photo of him surfing, too: a “practical application of Mr. Degen’s math fundamentals,” he wrote.

“Now numbers drive me a little bit crazy. I do the numbers on my taxes and that’s about it.”

Under Degen’s coaching, the surf team would go on to win a slew of state championships, and he humbly offers that the team’s success “had nothing to do with” him because the kids were just so good. The team had practice at Salt Creek, a world-class wave beach, around six in the morning and through the first period of the day (“surf class”). Legendary pro surfer Pat O’Connell had Deegs as a teacher and would give a good rundown of the day’s waves.

These days, Mr. Degen is still rocking strong. But he’s fine with letting his math books collect dust. “I was I was really good with numbers. Past tense. Now, numbers drive me a little bit crazy,” he says. “I do the numbers on my taxes and that’s about it.”

“It's got a life of its own,” he says of the picture. “It just keeps being resurrected. I think it’s all just pretty fun.” His daughter spotted the photo on the can of a craft beer in San Luis Obisbo (“would have been nice if they’d given me a free one,” Mr. Degen quipped), and his family even printed the photo onto t-shirts.

Upon his retirement in 2015, the yearbook asked him to re-create the photo. He hopped back up on a desk and made a similar pose, this time with gray hair, glasses, and nearly four decades of teaching under his belt. The whole thing is a happy surprise. He never intended anything more than a corny ploy to impress his love interest, but take it from Deegs: “Some things just keep living.”