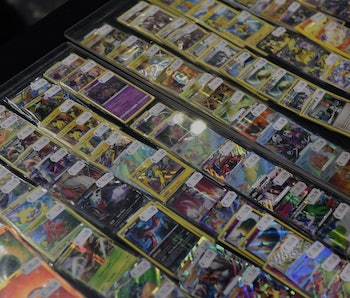 As the hype around Pokémon cards continues to escalate, Target has made the decision to step out of the way completely. The retail chain will no longer sell Pokémon cards in any of its physical stores beginning Friday, May 14. Target told Bleeding Cool that MLB, NFL, NBA, and Pokémon trading cards will no longer be sold in its stores “out of an abundance of caution.”

Pokémon cards have seen a massive resurgence in popularity in the last few months; some have gone so far as to call it a “crisis.” Card grading services are overwhelmed by demand. The Pokémon Company is rushing to print more cards as quickly as humanly possible. It’s a lot.

Retailers have profited off this hype, but they’ve also been hit with its worst side effects. Someone in Wisconsin reportedly pulled a gun out in a Target parking lot over a sports trading card disagreement. Card collectors might be upset by Target’s decision to cut off their supply but safety is definitely a more pressing concern here.

Gotta catch 'em all — This year the Pokémon franchise is celebrating its 25th anniversary, bringing nostalgia in the form of all kinds of creative collaborations and the promise of truly exciting new entries in the video game series. And then there are the Pokémon trading cards — after many years of gathering dust in our childhood bedrooms, they’re suddenly worth enormous sums.

The Pokémon card frenzy has been problematic for retailers for a while now. People are ripping open unpurchased cereal boxes to find the cards and collectors are buying up so many Happy Meals that there aren’t any left for actual children. Someone in Japan broke into a trading card shop by hanging on a rope to steal $9,000 worth of Pokémon and Yu-Gi-Oh! cards.

Only a matter of time — Target’s decision, in this context, does not come as anything close to a surprise. The company had already begun implementing restrictions on how many packs of cards each customer can purchase, and some stores have had to ban overnight camping as demand increases. Walmart stores across the U.S. have also stopped in-person trading card sales, though the company has yet to call for an official ban.

Target has specified that online Pokémon card sales will continue. It’s a lot more difficult to cause property damage — or threaten someone with a gun — from behind a computer screen. A good call, we’d say.