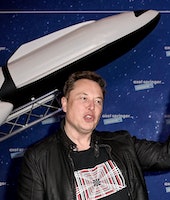 After weeks of speculation, Tesla revealed in an SEC filing today that it has acquired $1.5 billion in bitcoin. The long-awaited purchase sent the price of the popular cryptocurrency above $44,000 for the first time ever.

Tesla’s purchase is industry-shifting news, giving a huge amount of credence to bitcoin as real currency. The company also shared today that it plans to accept bitcoin as a form of payment for its products “in the near future.”

Musk has been a long-time supporter of cryptocurrencies as legitimate and generally helpful. Mainstream acceptance of bitcoin is looking closer than ever.

Here we go — Broad acceptance of bitcoin has been a long, drawn-out struggle. The cryptocurrency first became available in 2008, but it’s only in the last few years that it’s been adopted by anything close to the mainstream. It’s an extremely volatile currency, as evidenced by Musk’s ability to spike its value at random, and many in the world of economics still worry it may fail in the long term.

Musk’s interest in bitcoin has waxed and waned; most recently, he added “#bitcoin” to his Twitter bio, which sent the price of the currency up by approximately $5,000 in an hour. Last week, in a somewhat-impromptu Clubhouse chat, Musk said he thinks bitcoin is “really on the verge of getting broad acceptance by conventional finance people.”

Tesla is one of the largest companies to invest in bitcoin, and, as such, it will absolutely impact the currency’s adoption rate.

Elon’s power — Tesla’s $1.5 billion bitcoin acquisition is great news for cryptocurrency. It’s also a little concerning just how much the company’s head influences our finances, though. Musk’s internet influence has been put on prime display lately. At the end of January, Musk tweeted that he “kinda” loves Etsy, and the site’s stock shot up by more than 10 percent. He accidentally helped a random medical company’s stock after his tweet about messaging app Signal was misinterpreted.

Musk has also been helping the alt-currency Dogecoin take off in recent weeks. His tweets about Dogecoin have toed the line between meme jokes and seemingly serious investment advice — and Dogecoin’s price has jumped by more than 600 percent in the last month as a result.

Bitcoin investment is still inherently risky. But Tesla is willing to put $1.5 billion into it — and that’s enough to send waves through the cryptocurrency community. Some might call it a tsunami.