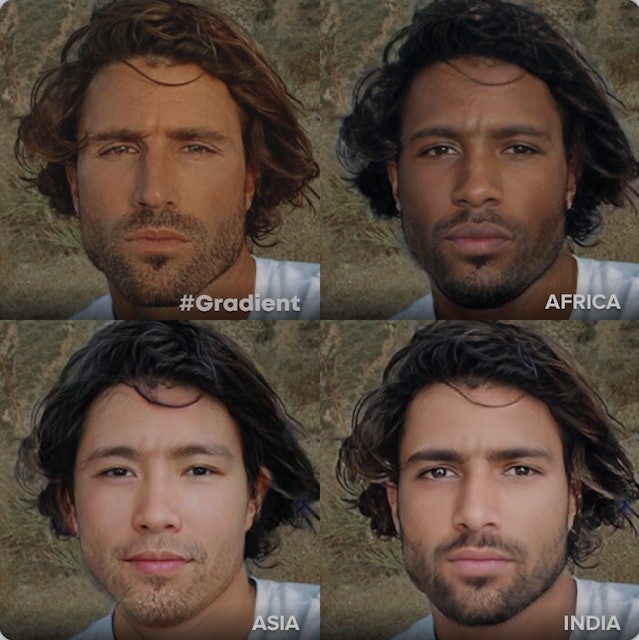 We don't know who still needs to hear this, but please, please refrain from any and all forms of blackface no matter the medium, intent, troll, or size of monetary endorsement. It's never okay, okay? Especially not when you're using it to digitally alter faces in the hope of making a quick buck.

The newest rash of racially insensitive posts comes courtesy of the popular Kardashian clan-endorsed photo filter and editing app, Gradient, which mostly offers up your garden variety social media retouching tools, gimmicky portrait modes, and various other shameless self-promotion aids. Once again, however, we find ourselves up to our (natural complexioned) necks in astoundingly tone-deaf influencers, celebrities, and everyday internet denizens using the app to replicate themselves as other races with carefree abandon.

As Mic wrote in 2019, the origins of the company are definitely cause for concern:

The app is made by a developer called 'Ticket to the Moon, Inc.,' a relatively unknown company with little to no information about it on its website or online. The app's terms of use discloses the company's address at a location in Delaware, but a quick Google search of that address brings up an international investment firm called Meihua Capital Partners LLC instead of Ticket to the Moon. Not much else is mentioned on either the Gradient or Meihua webpage, so it's unclear how closely the two businesses are related. The terms of use also state that the company won't claim any images as its own, but it does give itself a pass to use your content freely to provide its services (which includes any other apps made by the same developers).

Trying to save face, and failing — A quick trial run of Gradient this morning reveals some interesting discrepancies between what's advertised on the company's website, and what the app actually offers. For one thing, its "continent" filters appear to have swapped out its "Africa" option with a "Brazil" replacement sometime between today and when Brody Jenner tweeted out his endorsement, which included Brody Jenner in (digital) blackface.

The website also advertised an "ethnicity estimator" option that included a "Jewish" option, although that feature appears to be missing entirely from the app. Which is unfortunate because, as a Jew myself I would have loved to see what a Jewish-with-added-Jewishness version of me would look like. We've reached out to Gradient for comment on both matters and will update this story accordingly.

As unfortunate as it is unsurprising, Gradient is far from the only app with similar race-related problems. Take Twitter, for example, which appears to include a racially-biased image-cropping algorithm. Oh, and facial recognition tech is probably racist and sexist, too. Then there's Facebook, which... well... is still just being its usual objectionable self.