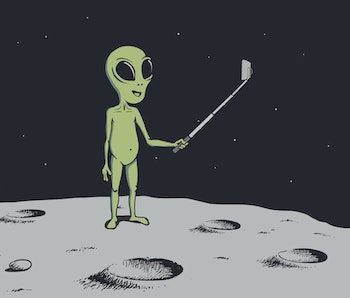 We'll avoid all moon puns and get straight to the point: the moon is set to get 4G coverage thanks to funding from NASA for Nokia. In 2018, there were reports that Nokia was shooting for the moon (sorry) by taking mobile network infrastructure to the lunar surface. NASA announced the funding initiative, noting that the "system could support lunar surface communications at greater distances, increased speeds, and provide more reliability than current standards."

The $14.1 million funding is part of NASA's $370 million set for contracts for different companies, including Alpha Space Test and Research Alliance of Houston, Astrobotic Technology of Pittsburgh, Masten Space Systems, Teledyne Energy Systems, and others, according to XDA Developers.

What this means for astronauts — The ability to use 4G on the moon is especially useful for astronauts and rovers (robot explorers, that is, not dogs). Expeditions could get a lot more effective as communication capabilities with base stations could increase over time.

NASA's Space Technology Mission Directorate's associate administrator, Jim Reuter, said, "With NASA funding, Nokia will look at how terrestrial technology could be modified for the lunar environment to support reliable, high-rate communications." Especially when it comes to rovers, 4G connectivity could help the electric vehicles roam the lunar surfaces and convey information back to Earth more speedily.

Previously, Nokia and Vodafone announced they had plans for a 4G moon mission in 2019. The idea was to launch Audi-manufactured rovers for the moon with connectivity. Unfortunately, the launch didn't happen. But Nokia is still in the picture with its ambitions for cellular services on the moon.

Can you hear me? — Before you get your hopes up, just bear in mind that technology like this often doesn't go as planned, as is evident from Nokia's previous failed attempt with Vodafone. As Niraj Chokshi commented in the New York Times in 2018, technology for 4G connectivity on the moon is practically featherlight — "weighing in at less than a kilogram" but it is also incredibly difficult to execute the deployment successfully.

The chief executive and founder of PTScientists, Robert Bohme, told the outlet two years ago that while, sure, "it's a technology that’s been used on more than a billion devices globally," it was worth remembering that the agencies involved needed to be "really careful, really efficient, and not screw up."

It's not for any complicated reason. We've never really had a project as extensive as 4G on the moon before. "Doing something for the first time," Bohme said at the time, "is kind of a challenge there." Also, arguably, they should really skip straight to 5G now, given that's set to be the new standard. Fortunately, the rovers won't know the difference, though.