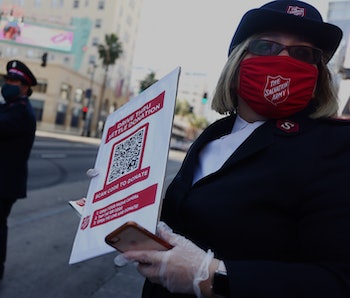 Bitcoin is having something of a spotlight moment this week. The cryptocurrency’s value reached and breached $20,000 for the first time this week, after more than a decade of open trading. It’s even garnered the attention of people and groups who otherwise wouldn’t pay any attention to it — like the Salvation Army.

The Salvation Army will start accepting Bitcoin as donation currency for the first time in the organization’s history, cryptocurrency giving platform Engiven announced today. Donations will be accepted in Ethereum, another popular cryptocurrency, as well.

“We believe that the value and mainstream use of Bitcoin had created a wonderful donation opportunity to meet the high level of need,” said Douglas Riley, leader of the Salvation Army’s USA Western Territory. “We are grateful for our partnership with Engiven, who has provided a seamless onramp to our next generation of fundraising tools."

The Salvation Army isn’t exactly the noblest of nonprofit organizations. Besides those clanging bells at street corners and mall intersections, it’s best known for its many scandals — especially its history of anti-LGBTQ activities. So it can jump on the crypto wagon if it likes, but it won't be getting any from us.

Bitcoin is real currency now — The Salvation Army says it expects a busier-than-usual holiday season for the organization, serving up to 155 percent more people with housing and other assistance. It’s hopeful the ability to donate in more currencies will help with fundraising efforts and fill that gap.

Cryptocurrency isn’t exactly new — Bitcoin was invented in 2008 – but 2020 has proven once and for all that it’s not going away any time soon. One Bitcoin was valued at just under $7,000 at the beginning of 2020, and now that price has increased more than three-fold to just over $21,000.

This is the year Bitcoin hit the mainstream. Even PayPal plans to accept it (and other cryptocurrencies) beginning in 2021.

It also has some downsides — Because Bitcoin isn’t something you can hold in your hands, it’s surrounded by an air of mystery. Most people don’t know what it is, exactly, never mind where it comes from. And that could prove the currency’s biggest issue moving forward.

Bitcoin is “mined” — not with a pickaxe in a dark cave but rather using computing power to solve complex equations and sustain the distributed ledger that records and verifies every transaction. And as Bitcoin becomes more valuable, more people are investing in these systems. They’re profitable now.

Those computers need enormous amounts of power to create even one Bitcoin. That toll isn’t often factored into conversations about the currency. It’s contributing to climate change — and quickly, at that. Because of Bitcoin’s immateriality, we often lose sight of its less savory physical side effects.

Donate elsewhere — The Salvation Army has issues of its own. Despite the good work it does, it also has a storied history of supporting anti-LGBTQ agendas. In 1986, for example, the Salvation Army explicitly campaigned in New Zealand against the Homosexual Law Reform Act, which set out to decriminalize homosexuality.

And that’s only the beginning — the organization has opposed numerous policies and laws focused on LGBTQ civil rights. The organization has tried in recent years to clean up its image by making positive statements about the LGBTQ community, but it’s found it difficult to shake its past.

There aren’t many charitable organizations that accept cryptocurrency — but you’re better off saving your Bitcoin and watching its value skyrocket anyway. Donate in dollars, and perhaps to an organization that cares about humans regardless of their identities instead.