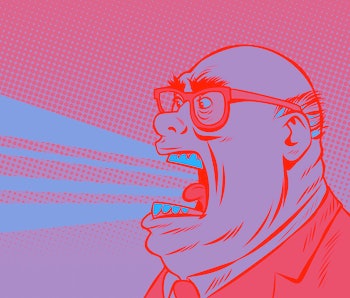 Conversational dominance, "manterruptions," hellish work meetings — whatever you want to call them, many women complain about the issue of being interrupted or spoken over in the workplace. It seems to be such a pronounced issue that universities have gone as far as conducting research to quantify just how much men dominate workplace conversations.

George Washington University reported that men interrupt women 33 percent more than they do other men. To tackle this issue, School of Visual Arts' student Stephanie Gamble worked on designing an app that would put these "manterruptions" to an end, or at least make the culprits aware of their behavior, Core77 reports.

It's speculative at this point, so no one's signed on to develop it. But the potential use cases are intriguing. Gamble proposes making the app part of corporate onboarding and then having employees use it during meetings. In addition to visual cues the app provides, the app could potentially be linked to payroll, with punitive measures for regular offenders.

What Upbraid's onboarding looks like — Gamble's app would use codified and quantified data to ascertain who exactly hoards conversation time and who is hushed as a consequence. If you're talking too much, Upbraid would send you nudges and alerts to check yourself. At the end of a meeting, the app then would give a summary of conversational slots, interruptions, and even volume level.

What happens if I talk too much? — You'll look like a villain in the app. Literally. The person dominating conversation will see their avatar grow, and eventually turn red and push them into the corners if they don't pipe down. Presumably, users would be able to allow for presentations or other instances where there's intentially a single, dominant speaker.

Restitution in real-time — The app's real-time evaluation and analysis of conversation mean it would be possible to react in real-time too, potentially deducting money from the culprit and redistributing it among their colleagues. That's sure to be controversial, and perhaps it would be more prudent to start with light public shaming, for instance.

This could backfire — Using punitive measures, including docking pay from someone's salary — which is something already often impacted by race, class, and gender — seems unlikely to improve the situation. As Core77 reports, Gamble's approach is purposefully harsh as a means of provocation. But, given that office spaces and other workplaces are often already so suffocatingly bureaucratic and eager to punish workers for the smallest mistakes, Upbraid's proposed modus operandi could well backfire and spark backlash and hostility from employees.

Of course, for now it's just an idea. But hopefully, talk about it and — and other ideas like it — will help spark workplace conversations about how to ensure employees are able to meaningfully participate in discussions. Because diverse views and voices tend to make for better workplaces for everyone.