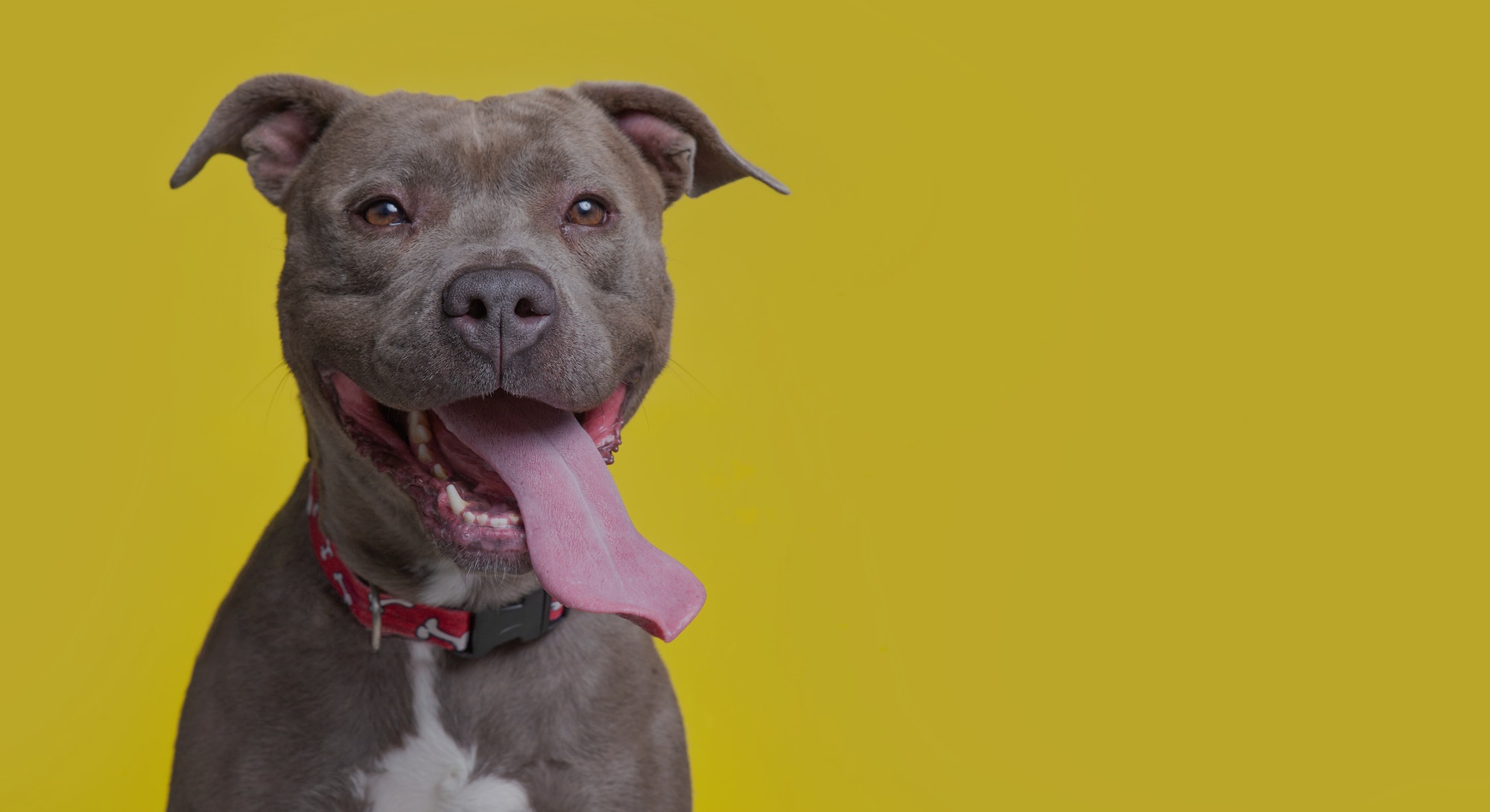 When Isaac Brown moved out of his family home to play football for Central Michigan University in 2003, he was excited to adopt a dog.

He had a kind in mind that reflected his personality: calm, friendly, and above all else, loyal. He adopted his first dog at college, in 2006, and named her China. But his family disapproved.

“My dad never wanted me to bring her home, because she was a pitbull,” says Brown, a strength and conditioning coach in Ontario. (He played pro ball for five years, in the NFL and the Canadian Football League.) Though Brown had grown up in a dog-friendly household, it was an anti-pitbull one. “My dad was a fool,” Brown says. “He fully bought into the stereotype.”

China has since passed away, and Brown has a new dog named Xena, whom he adopted in 2015. When she turned out to be just as lovable as China, he knew he had to share her with the world. In February, he started a TikTok account, poor.xena, dedicated to her.

Brown started with clips of Xena on walks, on the couch, and simply being herself. Then, in June, he posted a video in which he wakes up Xena by saying the magic word “chicken.” The clip has been viewed 38 million times.

Brown is now one of the most prominent pitbull influencers on TikTok, with half a million followers. The #pitbull hashtag has amassed over 17 billion views, and is dominated by dogs (though some of the tags refer to the musician Pitbull.)

Pitbulls are dogs with a public relations problem. Although the breed has a temperament rating of 87.4 percent, higher than both German shepherds and Golden Retrievers, it is often associated with violence. That’s because pitbulls are often pitted against each other in dog-fighting rings, a situation that led PETA to dub the breed “the most abused dogs on earth.”

According to one study, pitbulls are less likely to bite owners and strangers than dachshunds, chihuahuas, and beagles. (The true number and severity of pitbull bites in the U.S. each year cannot be confirmed, as the Center for Disease Control stopped collecting dog-bite data by breed in 1998.)

“Despite the tremendous behavioral diversity among pitbulls, they’re often stereotyped as dangerous,” says animal behaviorist Dr. Pamela Reid, vice president of the ASPCA Behavioral Sciences Team. “Pitbulls are one of the most at-risk populations [for euthanasia] in shelters today. These preconceptions can be life-threatening.”

“If I’m walking down the street with Xena, people cross the street and walk on the other side until they pass me.”

Pitbull influencers are very conscious of their dogs’ reputation. “If I’m walking down the street with Xena, people cross the street and walk on the other side until they pass me,” says Brown. “I took it upon myself to show this dog is not like the stereotype or what you see on the news. It was to show people how sweet and funny Xena is, and that how you raise your dog is extremely important.”

Jeanie Blazynski also is challenging stereotypes. In an effort to fight the stigma against pitbulls, the 53-year-old from Virginia — who works as a neural retrainer, helping people to rewire their brains in a more positive way — posts clips of her dog Petey under the account everyonelovespetey. “People have said they were never really sure about pitbulls, but they’ve realized they’re amazing because of Petey,” she says.

Balzynski appeals to her audience through humor, by editing together “conversations” she has with Petey about food and walks, or creating montages where she narrates his day to viewers. Together, the pair have 849,500 TikTok followers. “I think their hearts are warming from these videos,” she says of viewers.

Brown has had a similar experience. “People in my comments have mentioned they never saw a pitbull do the things Xena does,” he says. In a bid to show how sweet pitbulls can be, he often posts clips of Xena trying to bring toys on her walk, getting excited when Brown returns home, and even whining when he won’t get into bed.

The coach thinks the video-based format of TikTok has been key to winning people over. “If I just show a picture of Xena with her toy in her mouth, people can’t see her personality. They can’t feel her right,” he says. “But when you see a video of her walking to the door as I come home to bring me a toy, or her cuddling up to me, it shows her sweetness and how caring she is.”

Not everyone finds TikTok’s pitbull videos endearing. Members of the Reddit community r/banpitbulls, a small but dedicated group of 36,800 users, have been vocal about their distaste for the growing niche.

“Pitbull owners project more than any other breed owner that their pet is some large baby that could do no harm, when the videos from our subreddit show quite the opposite,” says 24-year-old waste management worker Michael, a New York–based r/banpitbulls member who asked Input to withhold his last name for privacy reasons. “It’s almost like some type of psychosis has gripped the pitbull-owner community. It’s utter insanity.”

Brown believes people like Michael are biased. “I think some people have felt threatened because of a pitbull in the past, and they stick to a certain narrative,” he says. “They’re speaking from a place of pain. After 13 years with China and five years with Xena, I’ve never seen a pitbull show aggression. It’s a lot to do with how you raise them. So I try to ignore the negatives.”

Ohio-based dog adoption coordinator Joseph Kay, 34, who posts under the name adoptingdogs to 2.1 million followers, agrees that problematic pitbulls are the product of bad owners. “They’re great dogs, but people don’t know how to take care of them or train them,” says Kay, who is also a pitbull owner. “If you allow the dog to do whatever it wants, bad things happen. But that happens with any dog.”

Blazynski’s main hope is that pitbull TikTok will inspire others to adopt the often-misunderstood breed. “If you go to a shelter, you're going to see a whole bunch of pitbulls,” she says. “When they get adopted, they’re so grateful. I think that’s why people love Petey so much. His devotion to me really shines through.”

Kay has posted several videos of pitbulls being adopted from his shelter on TikTok, and they are some of the most-viewed clips under the #pitbull hashtag.

Anecdotally speaking, it seems the community’s TikTok activism is working. “Someone drove four hours for my last pitbull adoption — because of my video,” Kay says. “A lot of people are watching and changing their minds about these dogs. My hopes are that more people start using social media to get the word out that pitbulls are great.”

Pitbull influencers want to help others, too. Blazynski thinks the clips she posts of Petey could be healing. “Watching something adorable pulls emotion out of you and releases the feel-good chemicals we crave,” she explains. “You don’t need medication to release the dopamine and oxytocin. That’s what a video of Petey does.”

Brown believes Xena’s videos also help other humans on an emotional level. “I’ve had messages from people who had to put their dog down saying that seeing Xena helps them get through it,” he says. “People even show Xena’s videos to family members going through a hard time. The heartfelt moments make them feel better.”

Ultimately, Brown he wants to go even further. He hopes Xena could be a spokesdog for pitbulls across the country. “I’d love to get her in a movie, go on some talk shows, just get her in front of the world,” he says. “Xena and I will broadcast to as many people as possible, so the world can see pitbulls aren’t a monster breed. They’re a loving one.”