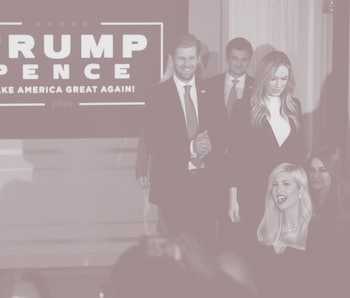 Lame duck Donald Trump’s voter fraud hotline has been shut down after TikTok users flooded it with fake calls. The hotline — meant as crowdsourced evidence for his continued misinformation campaign against Joe Biden’s win in the 2020 presidential election — was a full-fledged war room operation in Arlington, Virginia. It no longer exists.

The hotline was one of many hastily created attempts by the Trump campaign to throw the election results into chaos. In most instances, those measures have served to undermine Trump’s claims of voter fraud rather than bolstering them as he’d hoped.

While Trump’s misinformation campaign, with its meandering lies and threats of violence, are certainly anxiety-inducing, there’s room here for some humor. Especially when the Trump camp leaves itself open to simple attacks like prank calls — even after falling for the same thing just months ago.

We hardly knew you — It’s been less than two weeks since Trump’s team set up the voter suppression hotline. The phone number was first set up just a few days after Election Day, with important members of Trump’s campaign, including Eric Trump, Donald Trump Jr., and Rudy Giuliani, tweeting the number out with a plea for reports.

It didn’t take long for the phone line to be spammed. Eric Trump claimed in a tweet on November 6 that the DNC was doing so to “bog down the thousands of complaints” they were receiving. “Wonder what they have to hide,” he said.

The Trump campaign hasn't given up just yet. There's still an online form available for reporting supposed instances of voter fraud.

Keep it going, TikTok — TikTok’s largely young following has proven incredibly effective as a platform on which to build counter-attacks to Trump’s various attempts at staying in the White House. Earlier this summer, for example, TikTok users and K-pop stans mobilized together to spam a reservation link for Trump’s rally in Tulsa, Oklahoma. Trump was reportedly very frustrated when most of the reservations — and there were nearly a million — turned out to be false.

The campaign’s “Voter Fraud Issue Report Form” is still online as of the time of this writing, the social media vigilantes have already begun their campaign against that one, too. The form has been flooded with lewd images, according to a Newsweek report, and one Twitter user reportedly sent the entirety of the Bee Movie script in the comments section.

Keep up the efforts, TikTokkers. There’s work yet to be done.