“Most people can see the ethical dilemma there.” 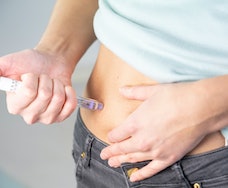 The latest social media health fad isn’t only dangerous for the people participating in it — the misguided weight loss attempts are putting complete strangers in harm’s way. According to both news outlets and government officials, TikTok users are buying up all the back stock of an injectable semaglutide medication used for diabetes patients called Ozempic, believing the drug will help them shed those pesky extra few pounds. The jury is still out on how effective it is, but even if that’s the case, it is most definitely not how the meds are intended to be used. And actual people with diabetes are suffering for it.

The misinfo-based fad is particularly an issue in Australia, where TikTok hashtags like #ozempic, #ozempicjourney, and #ozempicaustralia have racked up nearly 75 million views since earlier this month. “There are lots of issues people need to be aware of but most importantly, it’s not yet approved in Australia or the UK for weight loss,” explained Dr. Karen Price, the president of the Royal Australian College of General Practitioners. “It’s being used off-label, which means that this huge demand is now stopping people who have a genuine need for the medication for their diabetes.”

“Most people can see the ethical dilemma there,” she added... and yes, yes we can.

Wegovy woes — The current Ozempic scarcity appears to stem from here in the United States, where the FDA recently approved a similar semaglutide injectable, Wegovy, for helping with chronic weight issues. Seeing this news, TikTokers elsewhere seem to have located a related drug and started advocating for using it themselves for dieting. Unfortunately, many general practitioners were open to the idea. As a result, doctors are reportedly being forced to backorder Ozempic while even attempting to find replacements for their diabetic patients who suddenly can’t find their usual, much-needed meds.

While stocks are expected to replenish sometime around mid-June, that’s still far too long to ask of innocent people with chronic conditions, especially when there are people who currently have their hands on the drug for completely different, ancillary reasons.