“I think of this as sort of the third phase of getting back to normal.” 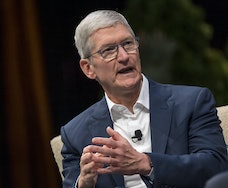 Apple CEO Tim Cook says factories in China that manufacture its products are reopening as China is getting the coronavirus under control. He shared the comments in an interview with Fox Business.

"When you look at the parts that are done in China, we have reopened factories, so the factories were able to work through the conditions to reopen," he said. "They’re reopening. They’re also en-ramp, and so I think of this as sort of the third phase of getting back to normal. And we’re in phase three of the ramp mode." It's previously been reported that Foxconn, a major manufacturer for Apple, has been bribing workers to return with offers of free food and accommodations.

Cook's comments might leave some skeptical — As the coronavirus outbreak has begun spreading to other countries including South Korea and Italy. Also worth noting: a vaccine hasn't been developed yet, and China has its residents in cities including Wuhan forcibly quarantined, which inherently makes it harder for the virus to spread through human contact. It's not unreasonable to worry that workers returning to factories might instigate a new rise in infections.

The whole global economy is taking a beating — Stock markets have been plummeting as a consequence of the outbreak, amid fears that a global spread will have wider effects on the economy than previously expected. Apple warned investors last week that it is unlikely to meet its earlier revenue estimates for the current quarter due to supply issues caused by the coronavirus. Perhaps these new comments are intended to reassure investors that everything will be okay.

Either way, a quarter or two or slumping sales due to unforeseen circumstances does not represent an existential crisis for Apple. What's more concerning is the fact that many crucial pharmaceutical ingredients are sourced from China, which could have serious global health implications if production is paused for too long.

As for Apple, only sales numbers over the next few quarters will tell the story of whether or not it's been able to get production ramped back up significantly enough this early in the coronavirus cycle.