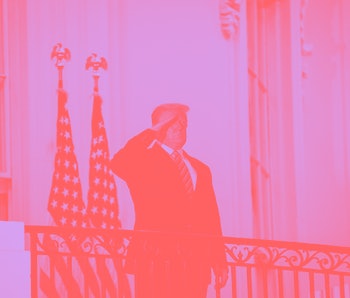 The MIT Technology Review reported on Wednesday that Donald Trump’s antibody cocktail was originally made from abortion-derived stem cells. Some of the antibodies provided to Trump after he tested positive for COVID-19 were created in a lab and originally taken from kidney tissue from an aborted fetus in the 1970s. The Trump administration is so staunchly anti-abortion that it has actively blocked researchers’ ability to use abortion tissue in this way for contemporary research.

Of course, the administration would likely argue you can't unscramble an egg, or that this treatment's current implementation condones its origins, but it nonetheless doesn't look good. It looks like another instance of the "do as I say, not as I do" approach that's been dominant in the Oval Office decision-making process of the last four years. Trump doesn't believe the rules apply to him, whether that's paying tax, not-talking over rivals in the debate, wearing a mask, or not deleting his own tweets.

Republican pro-lifers should bristle at the President's willingness to flout his own position when it suits him.

It's the hypocrisy that really smarts — Regeneron Pharmaceuticals is the company behind Trump’s emergency antibody treatment and created it using a cell line sourced from abortion tissue. Though the administration has pushed back aggressively on this kind of research, these methods have yielded numerous life-saving drugs and vaccines. In August alone, the administration blocked 13 out of 14 funding proposals that included this method, but they're more concerned with fresh cells than older ones.

The cells from the abortion, 293T, have acted similarly to cancer cells, dividing in a lab for decades and long-since modified genetically. What was used last weekend was thus not directly from the abortion, and the administration has been less interested in curtailing research using these grandfathered-in cells, as it were. Regeneron and other labs have relied on 293T cells to create virus-like "spike" proteins and test different antibodies efficacy.

An expert in the field would be necessary to know the drug’s origin, so it’s entirely probable that no one knew Trump was benefitting from a procedure he’s worked so hard to destroy access to for people with uteruses across the country. Even if anyone knew, they could argue that the treatment was too far removed from abortion politics.

Parsed through partisan eyes — “It’s how you want to parse it,” Alexandra Bowie, a Regeneron spokesperson, told MIT Technology Review. “But the 293T cell lines available today are not considered fetal tissue, and we did not otherwise use fetal tissue.”

It’s no secret that this year feels not unlike a season of television during the 2008 Writer’s Strike on steroids (or maybe Dexamethasone). These kinds of ironic complications feel too wild to be based in reality.

Still, while those closest to Trump might not have had the knowledge to know how his treatment came into being, they are definitely nefarious enough to let him take it even if they had. But they'd do well to consider what future calamities might yet be averted if the sort of research and treatments stem cells enable were encouraged instead of stifled. But that, of course, would require foresight, compassion, scientific understanding, and other traits the administration appears unable to comprehend, let alone demonstrate.