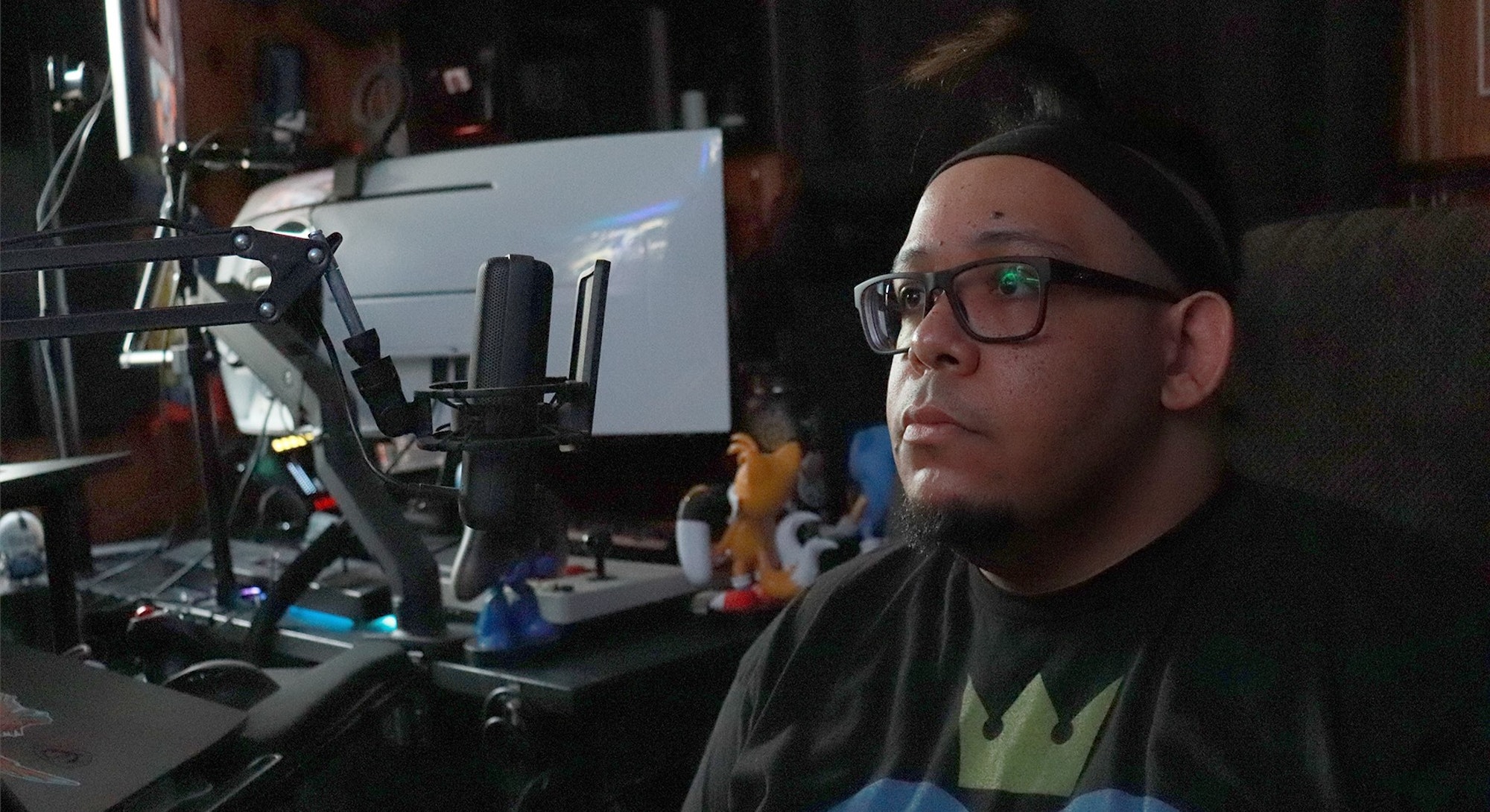 Although Toph, an American, had friends and a relationship in Japan, he found living there for the past eight years to be oftentimes quite lonely.

When he discovered Twitch in 2016, it seemed like the perfect way to meet others with mutual interests while he spent time gaming. So Toph, who was working as a teacher abroad, started to build a community on the platform.

He prided himself on the “soft, comfy vibe” of his streams, during which he played games like Animal Crossing and Kirby and the Forgotten Land in front of a virtual audience. Twitch served as a respite for him when things in the real world were getting tough. So last week, shortly after returning to live in his home state of New York, he was looking forward to streaming. He’d broken up with his partner and uprooted his entire life, and it would be nice to forget about that for a while.

Unfortunately, things didn’t turn out that way. “In that moment, someone came in and trauma dumped about a breakup from an abusive partner who’d cheated on them. And of course, my community is very sweet, so they started responding, and it just kept going and going,” says Toph, who has 33,800 followers on Twitch. (Toph does not disclose his full name or age to his audience.)

The emotional purge, which took place in the text chat of his stream, went on for 11 minutes and put Toph into a sour mood — the very state of mind he’d been hoping to escape. He’d been in a similar relationship to the one described, and although he says the conversation didn’t “trigger” him, he felt defeated and canceled his stream for the day.

“So much is going on in my life,” he says. “Twitch and streaming are some of the only things that take my mind off it. And now it's getting taken away from me. Why can’t these be my safe space, too?”

Toph is one of many Twitch streamers worried about the issue of trauma dumping, the act of offloading emotional problems without invitation. According to content creators on the platform, viewers are increasingly bombarding stream chats and their accompanying Discords with their IRL problems, which streamers are often not equipped to deal with.

The issue has become so prevalent that some streamers have started speaking out on Twitter. One influencer even put out a guide to dissuade people from trauma dumping on her streams.

Trauma dumping is a problem that affects streamers at all levels. Rob Logan is a variety streamer and podcaster from Massachusetts who has been broadcasting on Twitch for the last seven years under the name @theRobLogan. He has under 800 followers, but still deals with the issue.

“I had one viewer who just vented every time they were in chat,” Logan says. “They never really contributed to the conversation that was going on. They just derailed whatever was happening to talk about their problems.”

Logan recently went viral on Twitter after he tweeted a message to viewers — “PLEASE stop dropping your insanely depressing news into chat” it began — motivated by Toph’s trauma-dumping experience. “Even this morning, I was watching someone raise money for Ukraine in a charity stream, and somebody came in and said, ‘I’m pregnant. I just found out, now I’m sad,’” Logan says. “Everyone else had to stop the conversation and deal with it.”

Toph echoes Logan’s sentiments, saying that the issue often impacts the entire community. “There was a member of the community who kept talking about their dead pet. I asked them kindly to stop and take the conversation private instead, and after one of the streams, they posted a graphic picture of their sickly pet in the Discord,” he recounts. While Toph sympathized with his viewer, having previously lost a pet himself, he didn’t want other followers to feel triggered or upset, and he deleted the picture.

“I was trying to be there for them while making sure everyone else was comfortable and safe, but they immediately got angry at me,” Toph says. “They told me that I was in the wrong for deleting it and that I was heartless. They left the community after that.”

Twitch insiders believe the growing problem of trauma dumping stems from the combination of viewers’ access to and power over streamers.

“It’s a problem for bigger Twitch streamers because people will pay to have their messages read out, and they’ll share the minutiae of their problems,” says Terrence Wiggins, a 34-year-old part-time streamer, podcaster, and coin photographer from Virginia who streams as @TheBlackNerd on Twitch, where he has just over 800 followers.

“It’s the whole parasocial relationship thing, where people view the streamer as their friend, when really they’re not. [The streamer is] being paid to listen to whatever you have to say. It’s extremely unhealthy.”

Meanwhile, smaller creators often fall victim to trauma dumping because their eagerness to build a following outweighs their desire to set healthy boundaries with fans. Plus, they’re more accessible, since there tends to be less conversation happening on their chats. “I think that [smaller streamers] keep the lines blurred and very gray because they’re scared of chasing viewers away,” Logan says.

While Logan empathizes with people who are desperate enough to seek help on a stream, he is concerned that some people take advantage of the situation. “It feels like they’re trying to get that one-on-one time and block out the rest of the chat,” he says. “Because which message is more important? The one about the weird thing that happened to you at the store or the one where you say you’re thinking of killing yourself?”

Wiggins takes medication for anxiety, so he understands that viewers want to express themselves when they feel down. Still, he thinks that normalizing this behavior is bad for both Twitch streamers and viewers alike. “If the stream is very silly or just relaxed or something, it’s hard to get back on track when somebody brings something so dour to your door,” he explains.

His main concern, however, is how trauma dumping could impact viewers who engage in it, as they won’t learn to cope with what they’re going through appropriately. “If you're just doing that to strangers, you're not helping you, and you're not helping the person you're talking to,” Wiggins says. “Because they're ill-equipped to deal with it. And you're showing that you're ill-equipped to properly display your emotions.”

Toph thinks that some viewers are unabashed about trauma dumping because the internet, with its promise of anonymity, has eroded the social rules that folks tend to respect IRL. “People need to recognize that there are boundaries,” he says. “We’re all still people. It doesn’t change because we’re on the internet and we can’t see each other.”

Wiggins, however, is slightly less forgiving, as he feels viewers often overlook the distress that trauma dumping can cause for streamers. “One of the worst things that's happened to the internet is the discourse around mental health,” he says. “It started off as a way for people to share their issues and feel less alone, but I think some people don't have the boundary of knowing when to stop sharing.”

Logan and others are concerned that, if left unchecked, the trauma-dumping trend could drive streamers away from the industry. “I’ve seen a fair amount of people quit streaming as a result of people just constantly dragging their personal issues into chat,” he says. “They were just not equipped to handle it. Those are people who probably could have offered a lot of stuff to the Twitch space.”

At the moment, Toph is working on setting healthy boundaries with his followers by regularly discussing issues related to online etiquette. He even had an open discussion with his community about the breakup trauma-dump incident, after receiving an apology from the offending fan.

Toph hopes all this will make his stream a better place for everyone. “I’m very open to people talking to me and letting me know that they have problems. I just would expect that people have the foresight to explain their situations in a way that isn't going to harm someone else,” he says.

“My stream isn’t just a safe space for the viewer, or for me,” Toph adds. “It’s a safe space for everyone. That means all of us should feel comfortable there and have a bit of reprieve from the real world and our problems within it.”