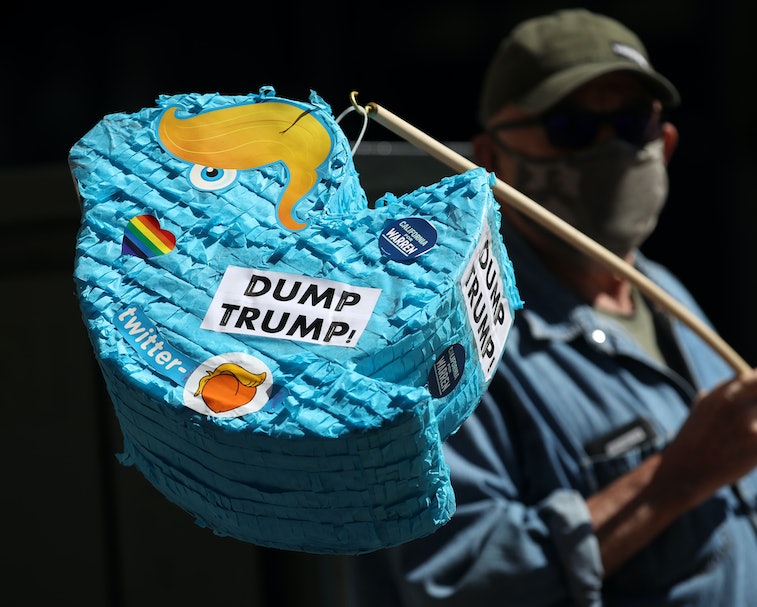 Twitter has slapped the President of the United States with another one of its misinformation labels, this time for posting a doctored propaganda video of two children. The social network labeled the president's tweet as 'manipulated media,' calling attention to the fact that the video Trump tweeted is trying to pass itself off as a CNN clip when it definitely is not. This comes on the heels of Trump's extended hissy fit and the resulting toothless executive order about social media.

While Trump's posts would clearly get any other user terminated from the platform — and have — the social media giant has taken a completely different stance than its rival Facebook, who has decided that violence and lies are perfectly acceptable messages to carry as long as they're popular or lucrative.

Goo goo gaga — This particular video, which is embedded below, depicts a clip of a Black child and a white child running around and playing, manipulated to look like CNN reported a story claiming that one of the toddlers was a racist. When it became clear that the video was actually a re-edited version of the source material, Twitter held the highest office in the land to the same standard it would any other misleading shitposter. Which is good, since the American people have shown an amazing ability to believe baseless nonsense.

Quote tweet — The company's official statement on the tweet, which is a contextual label and does not remove or hide the president's post, says "Multiple journalists confirmed that the video, which was shared by President Trump, is edited and features a fake CNN chyron. The original CNN story, which is from 2019, reported on a friendship between two toddlers."

Influence — Twitter's strategy here is far more forward-looking and savvy than Facebook's. By banning political advertising, hate speech, violence, and labelling misinformation as such, they've broken the right wing's usual tactic of exploiting the Barbra Streisand effect through creating controversial posts for free media coverage that feeds into their existing, false, narrative that they are being censored by a private company enforcing its basic decency rules. It would do well for Zuckerberg and company to start taking notes... or listening to their own staff.