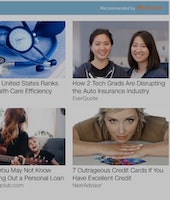 The estimated evaluation Outbrain is targeting.

According to The Drum, the details around Outbrain’s expected share price are not clear yet but it’s reportedly “targeting a $2 billion valuation.” The development comes after Outbrain abandoned its initial plans to merge with Taboola. With this upcoming stock market debut, Outbrain might be able to recover from the financial injury caused by ditching the Taboola merger. But it will never be able to salvage its image as one of the web’s most loathed ad factories.

Hated by many — Both Taboola and Outbrain have garnered negative press over the many years for churning out some of the most clickbait-y ads online.

One of the most egregious controversies involved author Matt Logelin. After Logelin's wife died, content mills pushed his story over the Taboola network. The widower told the Reply All podcast that his loss was turned into baseless gossip over the network with headlines like "Wife Dies and the Next Day Husband Clicks Through to Her Pregnancy Blog and dot dot dot" and "The Day After Wife Dies Husband Finds Her Secret."

You know Outbrained — It is possible that you have never heard of Outbrain or Taboola before but you certainly are familiar with their "work" as an internet user. When you scroll down some web pages, you must have noticed an influx of ads ranging from gossip about former child actors to "you won't believe what this woman does to look forever young" headlines. Taboola and Outbrain are two of the most aggressive content mills behind these tasteless “recommendations” online.

Both startups have Israeli founders and their products are nearly identical. Critics argue that both Taboola and Outbrain have spoon-fed the internet some of the most unintelligent and purposeless content. So far, Outbrain is staying quiet about the major details for this IPO. It says in a briefing that the IPO will become clear once the Securities and Exchange Commission wraps its review process up. All of this is "subject to market and other conditions," the firm added.

Outbrain's filing for an IPO will most definitely change nothing about the online ad firm's ethics (or arguably lack thereof). If both startups want to clean up their greasy image, they should consider officially ditching chumboxes for "Recommended For You" articles that are, ideally, less stuffed with drivel and nonsense.