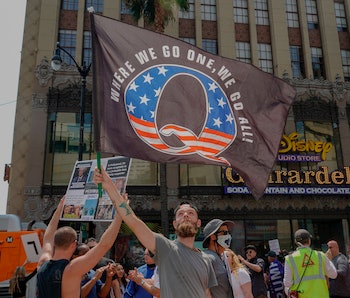 A new, massive rundown courtesy of The Washington Post details what happens when you randomly find yourself in the middle of QAnon’s crosshairs, and wouldn’t you know it? It’s absolutely terrifying. Last summer, both MAGA cultists and armchair online sleuths fed off one another and determined that Wayfair (yes, the home furnishings company) was part of the global sex trafficking cabal and that multiple children, whose pictures were circulated, had been kidnapped. Well, those very real children were not missing at all.

“Even when one 18-year-old girl went on Facebook Live to demand people stop saying she was being sold in a cabinet, commenters refused to listen,” explains the WaPo of one such situation. Unfortunately, even that wasn’t enough to convince concerned citizens, who alleged she was being forced to make the video. “You’re mad because I’m telling you that I’m not missing?” the girl told over half a million people watching her live video.

Somehow, someway, it even gets worse than that...

Getting the busy tone — Another unintentional side effect of QAnon obssessives on the hunt for nonexisting sex trafficking cults is that they apparently get in the way of investigations into very real, existing sex trafficking cases. In one instance, a victims advocate attempting to contact the National Human Trafficking Hotline on behalf of a woman couldn’t get through to anyone because the organization was swamped with calls asking them to look into Wayfair smuggling children via expensive dinnerware cabinets. No amount of explanations could convince these people otherwise, either.

“The majority of people who were swept up in this misinformation really believed that this was a human trafficking ring, and that no one cared,” a hotline director told the newspaper.

While often mind-bogglingly ludicrous, it’s just a further reminder that conspiracy theorists don’t just affect believers and their loved ones, they can often hurt people both figuratively and literally miles away from their unhinged accusations.