WeWork is now worth what it should've been all along 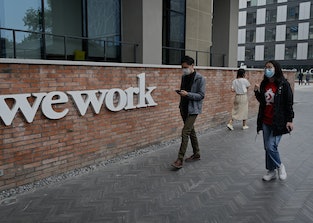 SoftBank now values the co-working company at $2.9 billion, down from its overblown peak of $47 billion last year.

Japanese conglomerate SoftBank now values WeWork at $2.9 billion, according to CNBC. The office co-working startup which was really a real estate business masquerading as a tech company has proven one of the most dramatic business mishaps in recent history. It rocketed to a peak valuation of $47 billion in just a few years off the back of its trendy office spaces, flexible leasing options, and the sway its charismatic former-CEO Adam Neumann managed to exert on SoftBank head, Masayoshi Son.

WeWork was already in free-fall last year when its valuation collapsed due to its astronomical spending and lack of any clear path to profitability, which was revealed when it was forced to be transparent about its business as it prepared to go public. Then coronavirus hit, and it rubbed salt in the wound. Suddenly nobody wants to work in an office, no matter how artisanal the free water or beer is. And at WeWork, unlike at a traditional office, tenants can cancel whenever they'd like.

A fundamentally flawed business model — WeWork sold itself on the idea of flexibility, that young startups and freelancers could rent an individual desk by the month and cancel whenever, and they surely are doing that now. WeWork itself, however, is stuck in long-term leases for hundreds of office spaces across the world. But in addition to being known for rampant spending and a growth-at-all-costs mentality, the company is now saddled with more than $50 billion in long-term lease obligations, though it's now trying to weasel its way out of some of them.

SoftBank made a really bad bet — WeWork was only ever really worth $47 billion to one person — SoftBank CEO Masayoshi Son, the startup's primary backer. The company billed itself as an innovative player reinventing offices with tech, and Neumann managed to secure huge investments from SoftBank on the back of that. But no amount of visionary idealism could change WeWork's terrible financials or flawed business model. Nobody on Wall Street wanted to invest when it tried to go public last year.

Without the ability to list as planned the company was set to run out of money within weeks before SoftBank came in with a desperate rescue plan that involved aggressive fat trimming, and eventually a buyout deal to get Neumann out. A deal SoftBank has since reneged on, and which it's now being sued over by Neumann.

Great branding, bad execution — The sad thing about WeWork is that it could have been a genuinely successful business. People loved working out of its expertly designed office spaces. But it was never worth the extravagant valuations it attracted. Consider that another office rental company, IWG, has more than 3,000 locations worldwide — many more than WeWork — and a valuation of $2.3 billion.

WeWork, like Uber and other rapaciously expansive businesses, is set to suffer the longer the coronavirus pandemic drags on. But the crisis is also showing the cracks in business models don't just favor growth over sound underpinnings, but demand it. The only people we feel sorry for? WeWork's employees, many of whom may soon be out of work, and the promising startups like Spacious WeWork acquired only to shut down when things started to go wrong.