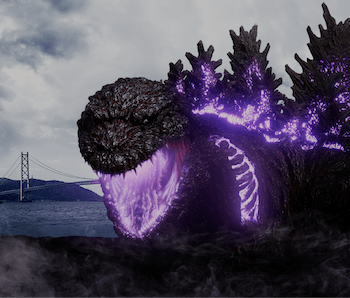 Japan's Awaji Island looks gorgeous. Its verdancy is breathtaking, the skies are clear, locals seem hospitable, and located at its Nijigen no Mori anime park sits a life-sized Godzilla whose mouth is wide open and designed to swallow visitors whole. Which seems like a very fitting — if a little obvious — metaphor for 2020.

For added insanity / fun, visitors enter the mouth of the kaiju curiosity ("kaiju" being the Japanese designation and collective noun for giant monsters so pervasive in the nation's popular culture) via a giant zipline. A 390-foot long zipline, to be precise.

The enormous Godzilla replica would be worth seeing on its own, but ziplining into the monster's mouth and coming out of its skull while hanging mid-air on a Japanese island? Now that sounds like a pleasant way to spend an afternoon with the family.

Kaiju fans will love this — You're not simply ziplining into Godzilla's terrifying, enormous maw — the theme park has a mission for you. The entire section for Godzilla comes under the Godzilla Interception Operation Awaji theme and there's a menu for those in the mood for a bite, including the Mothra curry and the Godzilla dessert.

You're meant to think of yourselves like researchers, grabbing the necessary sustenance for the trials and tribulations ahead, and then setting out on a journey to observe and study the cultural icon that has inspired innumerable video games, toys, movies, and cheesy T-shirts. At the end of the mission, visitors head up to the final challenge: riding a zipline that leads straight into the kaiju's angry mouth.

A nervous reporter's account — If you need more convincing that this sounds like a good time, there's an eye-witness account below. In this case, a Japanese reporter (who seems pretty nervous) heads inside Godzilla's mouth with less bravery then he'd probably like. We particularly enjoy his yelling.

Interested in becoming Godzilla's lunch? It's a mood, as the kids say, for 2020. The next time you visit Japan (which you might want to do next year just to check out the Super Nintendo World theme park), consider heading over to Awaji island's theme park and paying the non-unreasonable $36 for an exciting, and utterly unique, kaiju-themed experience.