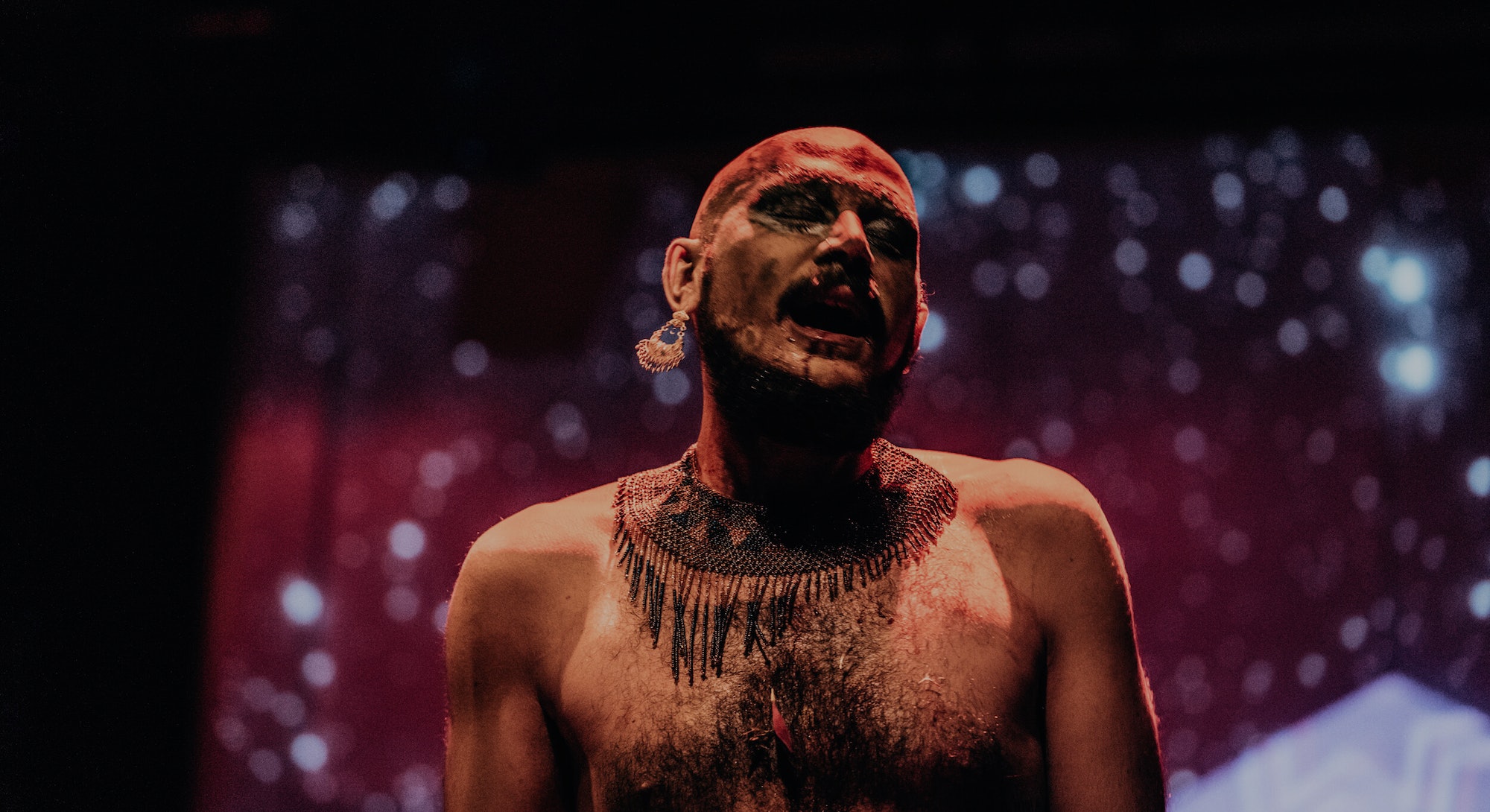 In the first installment of Zulfikar Ali Bhutto Jr.’s Tomorrow We Inherit the Earth video series, a woman sings a melancholy song on a pitch dark screen.

As her voice rises in urgency with the beat of drums, the viewer learns from the text appearing in the film that the voice belongs to Noor Jehan, a classic songstress from Pakistan, who performed throughout the 1960s and remains a household name in all of South Asia. In the video, Jehan’s songs are played by queer revolutionaries in the distant future, who broadcast radio messages to their comrades that have fled to other galaxies after an apocalyptic uprising by brown and black people against the forces that have colonized them for too long.

One of the revolutionaries, Faluda Islam, is a queer Muslim drag queen, resurrected by wi-fi technology to narrate the tale of how she died to a current-day audience. “They’re scared of us, the Anglos are scared of us,” her disembodied voice floats in space. “Of us Muslims. Of our piercing gaze, our androgynous features.” As rose petals curdle on the screen, she goes on to ask: “But is it really about Muslims? Or is it about being different?”

Faluda Islam is the alter ego of Zulfikar Ali Bhutto Jr., also known as “Zulfi”, a queer Muslim artist based in the Bay Area. While Bhutto works across textile, drawing, video, and even drag performance, the unifying factor in his art is a direct confrontation with white supremacy, and a reclamation of what it means to be queer and Muslim.

The 30-year-old artist was born in Damascus, and grew up in Karachi, Pakistan, in the seaside neighborhood of Clifton, where affluent families live in stone-tiled bungalows shaded by palm trees. As a child, Bhutto enjoyed drawing dinosaurs and pterodactyls on paper, channeling his imagination into something he could tangibly touch. Even then, he remembers his art as “storytelling-oriented,” a reflection of the stories he envisioned in his mind.

“They’re scared of us... But is it really about Muslims? Or is it about being different?”

“When you think and imagine something, it creates so much energy in your brain,” Bhutto said. “It needs to have a place to go. For me, art was a way of seeing what I was imagining. And it was really a desire to manifest what I thought could be possible in the world.”

The son of Mir Murtaza Bhutto, a left-wing political activist and member of a political family that advocated for democracy in Pakistan, Zulfi Bhutto grew up with awareness of social injustice in the world, and the need to end it. Bhutto’s grandfather, after whom he was named, had been the Prime Minister of Pakistan in the 1970s and was hanged in a military coup that the party he helmed alleges was supported by the CIA. The execution caused Murtaza to flee to Afghanistan and form a militant group, which was later accused of hijacking an airplane bound for Peshawar. Murtaza's involvement in the hijacking was never conclusively proven, and his family believes the charges were a machination of the military regime to censor his political vision.

“In my earliest memories of my father, he used this word ‘freedom’ and ‘injustice’ a lot,” Bhutto recalls. “Even the movies we watched were about this idea of freedom. We wanted to see a radically just world, especially as a family that had so much injustice inflicted on us. I always knew we lived in a world that definitely was not what it should be.”

When he was six years old, Bhutto witnessed injustice firsthand when his father was shot dead by police officers outside their house. “I had to face this uncomfortable truth that the world is not only what it shouldn’t be, the world is dangerous. It’s scary. And we live to keep ourselves and the people around us safe in it,” he said.

Bhutto grew up in Karachi in the early 2000s, when the city was ranked as the most dangerous in the world, fraught with street crime, ethnic violence and the fallout of the War on Terror. Even at a young age, Bhutto knew he wasn’t straight, playing with high heels and makeup, and not conforming to the standards of a strict gender binary. While it was difficult to be openly queer in the conservative climate in Pakistan, he was never ashamed of his sexuality and embraced it as a “divine gift.”

And yet, Bhutto acknowledges the art he produces today wasn’t possible then, as even open-minded Pakistanis weren’t receptive to a candid LGBTQ presence in art and media at the time. “When I was coming into my teens, you couldn’t really make art that was like, ‘Gayness is great. My sexuality is fine, or queerness is fantastic’,” Zulfi said. “The Karachi of 2004 wasn’t the Karachi of today. Even saying the word ‘gay’ was considered a bad word, it was like saying the F word, it was like swearing. Instead, I worked in this realm of masculinity, looking at what is soft, and what is femininity.”

Zulfi’s visual art series, “Mussalmaan Musclemen” explores the masculinity of brown men by transposing floral fabric on cutouts from an Urdu translation of an exercise manual written by Arnold Schwarzenegger. Similarly, a project called “Body Nation” formed a digital collage that showed how “colonialism and nation-building happens through bodies.”

Bhutto began to explicitly center queerness in his art when he arrived in San Francisco, pursuing a Masters degree in fine arts. Standing with other queer people of color in the clearing of a northern California forest, he witnessed a drag performance for the first time in his life. “It was inspiring to see this medium, and then I saw bearded drag queens as well, and I found the play with gender to be very powerful,” he said.

The performance made Bhutto realize the possibilities of showing queerness in his artwork, and Faluda Islam was consequently born. Zulfi performed in drag at nightclubs, and eventually at art performances, not just to redefine queer Muslim identity, but also protest the conditions of institutional racism and poverty he observed in America when he first came in 2014.

“This country is the metropolis of the empire, and it was so poor. It treated its citizens so badly. There’s no health care. And the amount of potholes on the roads in Oakland, it’s like Karachi,” he said. “There’s the presence of the state in the form of police, which is patrolling, violent and scrutinizing. But then there’s a complete absence of the state as a form of social, housing, infrastructure, and educational protection.”

That same year, protests against the murder of Mike Brown in Ferguson by police had galvanized the Black Lives Matter movement. Bhutto attended Block the Boat Oakland, a protest organized by an Arab-American antiwar organization to prevent ships stockpiled with Israeli weapons from docking in the Bay Area. By allying with the longshoreman’s union and local Black activists, the campaign pressured the container ship into rerouting for a port in Russia.

“We went as a huge contingent to protest, and I remember crying. It was like, wow, in the belly of the beast, things are possible,” Bhutto said. “I was so transfixed by the possibility, and then with the Black Lives Matter movement, you saw this refusal to back down. This collective spirit of confrontation reminded me of the internationalist movements of the 60s and 70s, when the Black Panther Party in Oakland was in direct contact with people in Vietnam, Palestine, Pakistan, India and the Arab world.”

And it’s precisely this connection with social justice movements that animates Bhutto’s artwork, narrating a revolution in the future led by queer people. “Revolution for so many people has been a very heterosexual affair, especially when we think of the Arab and Muslim world,” he said. “How do you find queer heroes? We retell history in the future, we resurrect historical figures and make them act in the future.”

“The joy and the love in itself was a protest.”

Bhutto cites Jean Genet’s short film “Un Chant d’Amour” (“A Song of Love”) as a major inspiration, which depicts two Algerian prisoners monitored by a French prison guard. The male prisoners fall in love with each other despite inhabiting different jail cells, and communicate through a hole in the wall. “The joy and the love in itself was a protest, to the point where the prison guard becomes infuriated by their love, and kills one of them,” Bhutto said.

Faluda Islam’s story is not so different, as she has also been martyred in the future queer revolution. But unlike Genet’s hero, she is brought back by wi-fi technology after revolutionaries dig into Islamic numerology and esoteric practices to outsmart their oppressor. Faluda, a zombie, cannot speak; digital shockwaves are sent through her body, and she tells her story, or channels the voice of dead resistance fighters of the past, such as Sana Mehaidli, a 17-year old suicide bomber in South Lebanon.

And the future represented in Bhutto’s artwork is queer, which Hushidar Mortizae, an Iranian-American fashion designer who has made costumes for Bhutto’s performances, notes is rooted in the ancient Asian civilizations of the past. “There is androgyny in Iran since antiquity, and in Farsi, there are no pronouns that point to male or female. That androgyny is very much in our cultures,” Mortizae said.

In revisiting the past, Bhutto uses the music of Noor Jehan and Iranian singer Googoosh in his videos and performances, and incorporates 35mm film footage of student protests in the 1960s, Cold War era speeches by world leaders, and period reel of everyday people in South Asia in his video art. Bhutto’s inspiration also hits closer to home, and he calls his work “an ode” to his father.

“My father’s life took him places he had no control over. And he also died and was martyred, and people desired to see him in me. And for me, growing up queer with that [expectation] was difficult. Like, how can I give you my father?” Bhutto said. “I can’t give you my father. I can give you me. Faluda Islam is me queerly reviving my father, telling his story in a way I can understand it. It’s a way for me to look at my father’s history in the past, and filtering it through me.”

“In Farsi, there are no pronouns that point to male or female. That androgyny is very much in our cultures.”

Islam also remains an important wellspring of inspiration for Bhutto, who sees his futuristic artwork as “Sufi sci-fi”, and has made embroidered minaret rockets, which are part of a spaceship named “Raheem”, the Arabic word for “mercy” and one of the 99 names of God.

Queer Muslims are often seen as an inherent contradiction, when the reality couldn’t be more different. Anum Awan, a graphic designer who has collaborated with Bhutto, said, “As a queer Muslim, you’re always trying to adapt or codeswitch or fit into a box, and you get so much resistance in who you are from queer people and Muslim people.”

Bhutto shares Awan’s frustration, but hopes to slowly change it with his artwork. “For the San Francisco gay scene, the only gay scene that existed was in the United States, or Europe, or Israel,” he said. “Gay people were [seen as] anti-Islam, if they lived in the Muslim world. And for a lot of people, that wasn’t the case. We have our culture and can be queer at the same time. There’s so much more to Islam, and the history of the countries where Muslims or people adjacent to them have lived. And there’s so much more to the lived experiences of Muslims.” ◍