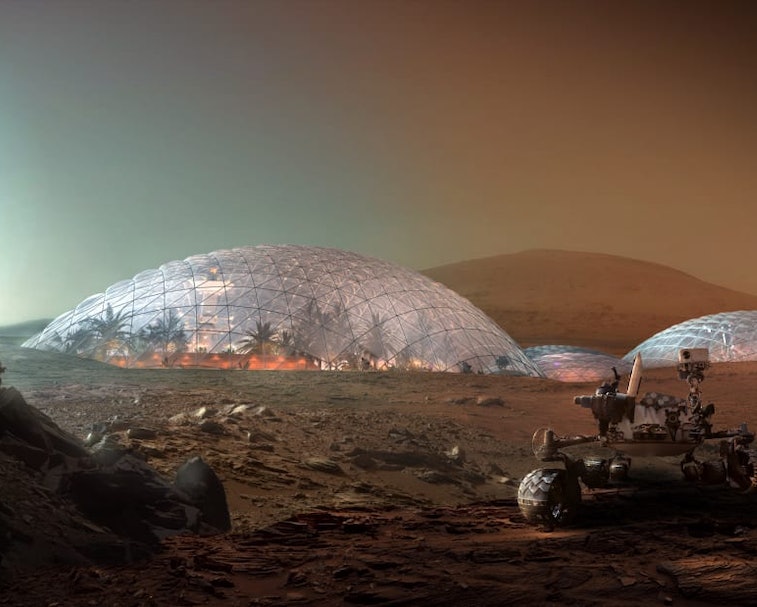 Move over, Elon Musk: You’re not the only one with big plans to colonize Mars. You might be leading the pack when it comes to figuring out how we'll get to Mars, but you're not the only one thinking about what we'll do — and how we'll live — when we actually manage that.

A group of architects in Dubai has been commissioned to design an experimental Martian city, and to actually take their plans from the drawing board into the desert outside the largest city of the United Arab Emirates. The inhabitable living space, which CNN reports is aptly named Mars Science City, is planned to cover 176,000 square meters (almost 1.9 million square feet) of the desert.

The designs for the city are stunning, to say the least. We’re talking absolutely enormous ellipsoid domes made with thick, translucent glass to let the sunshine in. Those domes are intended to enable scientists to work through the immense challenges associated with packing your bags and moving to Mars via various experiments and simulations.

This isn’t exactly an inexpensive science project — about $135 million has been earmarked by the United Arab Emirates government to cover it — but with that cost comes the potential to understand how we can best mitigate the risks associated with actually living on Mars. And those are plentiful and involve more than just pragmatic concerns like how to grow food or contend with waste.

Domes are, like, so in right now — Some of the biggest hurdles in creating a habitable city on Mars are just about the planet itself: Its atmosphere is very thin and offers almost no protection from harmful radiation. There’s almost no air pressure, which means that, despite the planet’s average temperature of -81 degrees F, a human's blood would literally boil in the open air. Not exactly the best conditions for building a human settlement.

To meet these challenges head-on Bjarke Ingels Group, the architecture firm responsible for the design of Mars Science City has proposed a series of interconnected biodomes. Those biodomes will be pressurized to keep our bodies functioning, and they’ll be pumped full of oxygen made by applying electricity to underground ice.

The architects are also having fun designing buildings that aren’t bound by Earth’s physics. Columns can be slimmer and longer, for example. They plan to 3D-print the buildings themselves under the domes, with massive skylights serving as ambient light sources.

More than just a pretty face — The real triumph of Mars Science City, though, will be the scientific exploration it enables. The planned city has plenty of research labs designed to let us mimic the problems we expect to face on Mars, and researchers will be able to work out the kinks to their proposed solutions in real-time.

Are you lonesome tonight? — One of the greatest challenges of colonizing a new planet is the isolation colonizers will have to contend with. Well, isolation from everyone except the people they go to Mars with, who they'll also have to learn how to live with for the longterm. Though there's always the option to leave the proposed Dubai domes — unlike those that would actually be installed on Mars — they will be perfect for testing the effects of longterm isolation and confinement on mental and physical health.

Mars Science City is still at the concept and design stage, but we're hoping it becomes a reality sooner rather than later. We'd hate to have the interplanetary travel challenges worked out first only to then have to hold off on sending Elon to Mars.