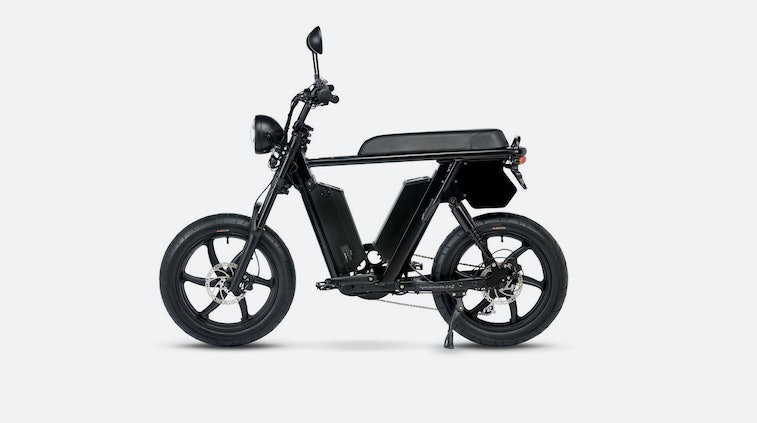 Juiced has announced a new electric bike dubbed the Hyperscrambler 2, a follow-up to the company’s original Scrambler. This bike, like the Zooz Urban Ultralight and Super73’s line of products, take the form of a scrambler-esque sub-motorcycle, a form factor that’s exploding in the electric bike market.

The Hyperscrambler 2 looks a lot like its predecessor, but the frame has been tweaked to support the new rear suspension which joins the front fork to make a full suspension system. This puts the Hyperscramlber 2 squarely in the same category as Super73’s R-series bikes, which are designed for a bit of off road action. Here, though, Juiced is using street tires which is disappointing to me, personally, but is probably the right choice for a bike that’s all about range.

Speaking of, the major attraction here is the Hyperscrambler 2’s dual battery setup. Juiced is including two 52v 19.2Ah batteries with this model which it says will give you more than 100 miles of range. Honestly, this seems plausible given my experience with batteries this size, but we won’t know for sure until these hit the streets.

Making use of two separate batteries is also not as simple as soldering them together; each pack includes a number of cells that have to remain balanced. If you really want to go deep on this topic, there’s a deep thread you can read here, but in short; it’s not easy. So, Juiced has something it’s calling the Intelligent Dual Battery Balancer. This might be as simple as using one battery then quickly switching to the other or it might actually balance the batteries together, but either strategy works.

Unlike many electric bikes in this category, the Hyperscrambler 2 has a full loadout of lights, including a headlight, brake light, and turn signals. This will be sure to keep your local police department happy, and it would appear that the bike’s top speed is limited to the legal Class 3 limit of 28 miles per hour. That said, Juiced lists its motor as a 1,000 watt Bafang Retroblade motor that can jump up to 1,800 watts at peak, so while it’s not a Sur Ron it’s certainly no slouch and could probably go faster. Plus there are the “lawyer pedals” that will allow you to ride in some parks, so Juiced really has its safety and compliance bases covered.

Juiced’s website says that the first batch of Hyperscrambler 2s will ship out in early November, and that preorders will open on September 23rd. The single-battery version costs $2,499 while the dual-battery version comes in at $2,999 (during the pre-order period), which is very competitive. Super 73’s top-end RX bike costs $3,245 at the time of this writing and has half the battery life of the Hyperscrambler 2 and just a bit less power. Needless to say this segment is really getting some intense competition, and I’m absolutely living for it.

The only downside I can think of for the Hyperscrambler 2 is weight, given those two chunky batteries, but is that what you’re going to worry about when you’re taking 100 mile beach rides with the crew? I doubt it!