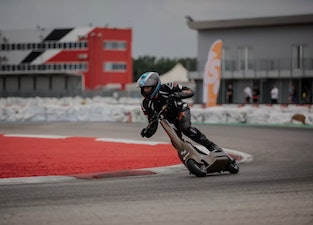 Electric scooters from the likes of Unagi, Razor, and Niu are a fun way to get around town, but their average top speeds of 15-20 miles an hour can admittedly be frustrating at times. You often just want a little more oomph to get the wind whipping in your face. Fortunately, there’s an answer to your prayers, though it might not actually come to market. An Italian mobility company has designed an electric scooter that can reach top speeds of... 62 miles an hour.

The scooter, the S1-X eSkooter, was developed for use primarily in the eSkootr Championship, an actual race series for high-speed scooters that’s set to take place next year. Its designer YCOM will issue a model to all thirty competitors in the race.

Truly extreme — In terms of specs, the S1-X features a two-wheel drive system with a carbon fiber chassis, front and rear suspensions, and electric motors on both wheels. In order to maintain stability at such high speeds, a torque delivery system continuously balances output between the two wheels. The final feature, which sounds pretty fun, is a turbo boost function that gives riders a temporary 20-percent increase in power when they need it most.

Apparently, sixteen riders have already tested out the S1-X and reported becoming fatigued from the demands of riding at such high speeds. It’s hard to really imagine what that must be like, but we imagine it entails a lot of shifting your weight around for the tracks bends, and of course clinging on for dear life.

It’s definitely wouldn’t be safe having these on the streets... but fortunately, it wouldn’t be legal either. People already get injured badly enough on the slower scooters that dot the streets of cities around the world. In press images, riders of the S1-X are seen wearing protective pads and full-on racing suits... which is some comfort. Because like motorcycle riders we can assure you there are only two types of eSkooter racers: those who’ve come off... and those who are going to.

More like this
Will Gendron
Sep. 16, 2022
Design
Campworks's electric camper is an off-grid powerhouse
Jackson Chen
Sep. 17, 2022
Tech
Zero’s long-range e-motorcycle is a beast on and off the road
Jackson Chen
Sep. 8, 2022
Tech
China’s Hummer EV knockoff may be more than just an imitator