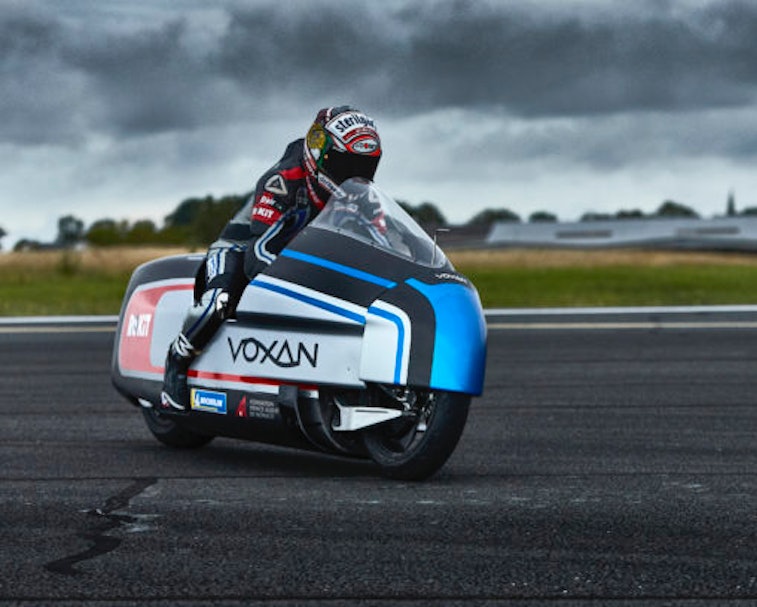 Before COVID-19 hit, Voxan Motors was working on a version of its all-electric motorcycle, The Wattman, designed with one objective in mind: going faster than any other electric motorcycle ever has. Designed to offer the aerodynamic advantages of a bullet train, the modified bike was meant to careen down Bolivia's Salar de Uyuni salt pan this month at speeds in excess of 205 mph under the guidance of legendary motorcycle racer, Max Biaggi. Now the team behind the record-breaking attempt is going to have to wait a full year. But that means plenty of time to work out any kinks.

The record Voxan wants to beat was set by Ryuji Tsurata, who took a Mobitec EV-02A to 329.085 kmh (204.484 mph), and broke a wrist in the process. The additional specifics are that the record has to be set by a "partially streamlined" motorcycle weighing less than 300 kg (661 lbs) "propelled by the action of one wheel in contact with the ground." It also, of course, has to be electric. Fortunately, Voxan's parent company, Venturi, has a reputation for making electrically-propelled vehicles go extremely fast. In marketing speak, this is very much in its wheelhouse. Except, this time, there can only be two wheels.

Venturi bought Voxan in 2010 and pivoted the French motorcycle manufacturer away from combustion engines and to electric ones. In 2013, it unveiled the initial Wattman, which is a beast on its own. It delivers 150 kW (203 HP) of power and 200 Nm of torque. That combination means it'll do 0–60 mph in 3.4 seconds. But the record-chasing Wattman boosts the power to an insane 270 kW (367 HP), suggesting it could do more than merely break the current record, it could destroy it.

A history of speed — Venturi was founded in 1984 and found moderate success building a GT it showed of at the Paris Motor Show. It dabbled in Formula 1 and Le Mans, but couldn't find financial stability, eventually declaring bankruptcy. Billionaire Gildo Pastor resurrected the brand in 2001 and moved its headquarters to his hometown, the Principality of Monaco. Since its relaunch nearly two decades ago, the company has unveiled various high-speed vehicles, including the Venturi Buckeye Bullet (or VBB-3), which set a land-speed record in 2016 of 549 kmh (341 mph) that still stands. The company has also been involved with Formula E since its inception, which is where the partnership with Rokit was first established.

After the virus — Though the ongoing coronavirus pandemic has delayed proceedings, it hasn't canceled them, just moved them out until next summer. Given the Wattman only had its first track run on March 12, the extra time might actually prove useful for testing. Most of the remaining testing concerns the motorcycle's software, according to Voxan, and will see the team ramp up testing through various speed increments to check thermal stability and other finer details essential to a machine designed to go faster than anything else like it... with someone on top of it, no less.

Designer Sacha Lakic's work, however, is done. Voxan says the motorcycle's distinctive appearance was "dictated partly by the technology, and partly by the level of performance targeted." Next July seems eons away, but when it rolls around we'll be ready to cast an eye to Bolivia to watch Biaggi do something his mother must be very displeased about.