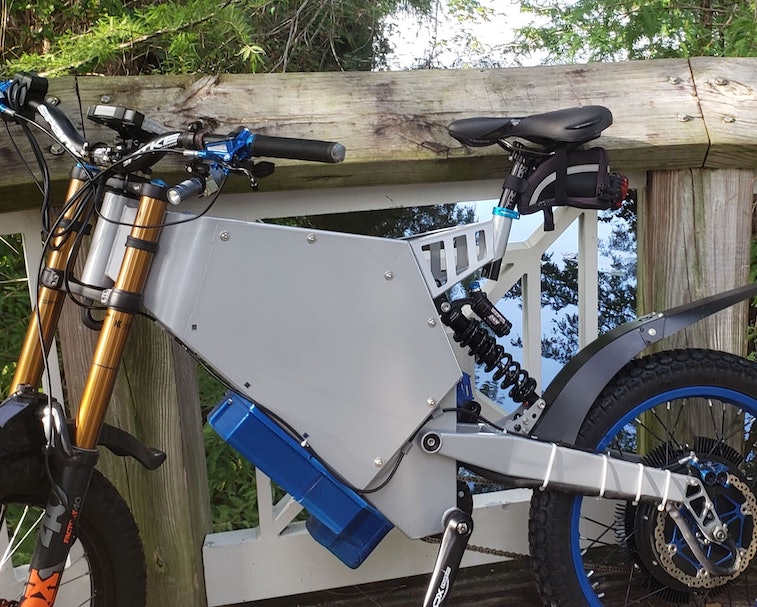 There’s a new contender for our preferred fully-electric apocalypse escape vehicle: a homemade e-bike built by Reddit user Xenodius from a mixture of off-the-shelf parts and custom-made 3D-printed ones. It’s theoretically capable of a top speed of at least 70 mph, but Xenodius says they’ve not taken it over 55 mph “only due to lack of balls.”

The bike will do 0-50 mph in 4.6 seconds, and its various power profiles can be switched between from a switch on the bike’s handlebars, or reprogrammed using Bluetooth. At the heart of the e-bike is an ASI BAC8000 electric motor controller and inverter. Power comes from a 3.3 kWh battery and peak output is ~20kW. If that sounds more motorcycle-like than bicycle-like, well, you’re not wrong.

The everywhere e-bike — Xenodius says they don’t own a car, so they use the e-bike to go everywhere. “Commuting, offroading, groceries, beach,” they say. As for getting unwanted attention from the authorities in Florida, where they’ve recently moved, Xenodius says they haven’t been pulled over yet, but with their previous builds they would “tell them straight up its capable of whatever crazy kW, and that I ride at legal speed / power in bike lanes when they're available, but use more power to move with traffic when I have to because I feel that's safer.” So far, that’s been good enough.

As far as the “bicycle” part of the e-bike, that comes from a Schlump HSD and Surly Singleator, though Xenodius admits the “human drivetrain” is “only useful for clown pedaling or emergency winching myself along on this beast.”

Off-the-shelf components — The frame is a Qulbix 140, which the fork is made by Fox and the brakes are Hope Tech. The bars come from Spank Spike and the rear shock absorber is a Burner DNM RCP28. Though the battery is a little tricky to remove — and required “a lot of work” — Xenodius says it’s designed in such a way that replacing cells will be a cinch when the time comes, requiring no more than a screwdriver.

This is Xenoidius’s fourth e-bike build, and that experience shows. The end result looks like the sort of thing we’d be willing to spend a couple of thousand dollars on, especially when you consider the price of similar e-bikes, like the Jeep / QuietKat, the Trefecta, Huck Cycles futuristic e-moped, or even Dutch company VanMoof’s far more traditional S3.