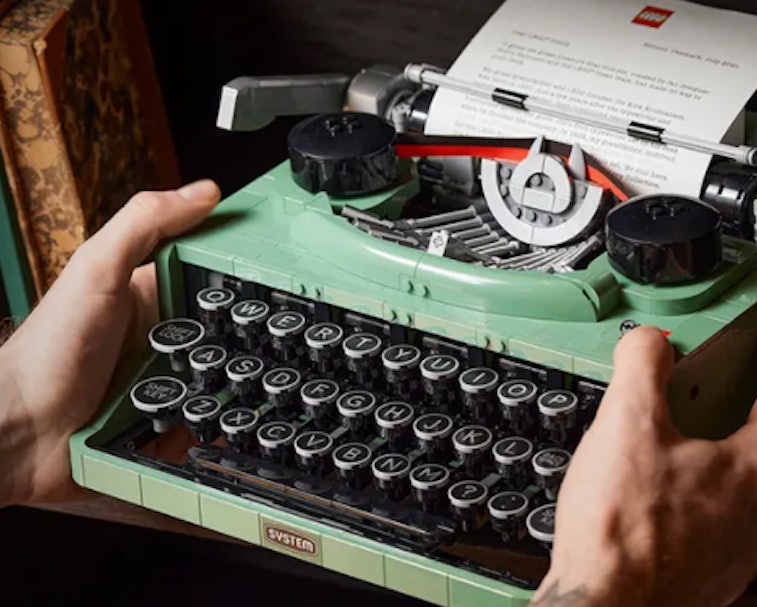 Lego is releasing a 2,079-piece typewriter kit based on a design that came out of the Lego Ideas program where fans submit custom builds, with the most popular turned into actual sets (following a review process to make sure they’re practical).

Historical significance — The latest set, simply called “Typewriter,” was conceived by Steve Guinness from the United Kingdom. His creation looked a bit different, and not nearly as high-fidelity as Lego’s finished design. But the company at least preserved the functional aspects from Guinness’ concept.

In case you don’t know how a typewriter functions (we barely do), the Lego Typewriter functions mostly like a real one. It has a center typebar that rises every time a key is pressed to strike a ribbon and form a letter; the carriage moves from right to left until it needs to be slid back across for the next line of text. You can feed in a piece of paper that will move up as you type, but there’s no ink in the ribbon, so you can’t actually write your long-threatened novel with the thing. Actually, perhaps that’s for the best.

In terms of design, the green color that Lego chose was meant to pay homage to company founder Ole Kirk Kristiansen, who used a typewriter with a similar finish.

The price isn’t right — Lego suggests the typewriter could “spark nostalgic feelings and the curiosity of younger fans who have never seen a typewriter before.” But, apparently, some typewriting enthusiasts don’t like the Lego kit because for its asking price of $199 you could easily buy an actually functional typewriter (or several). A real typewriter also has the added advantage of being able to teach your kids to be grateful for the joys of autocorrect.

Still, the Lego typewriter looks to be a fun project that will give you a neat piece of brick-based art to show off when you’re done. You can pre-order it from Lego’s website, with shipments set to begin on July 1.