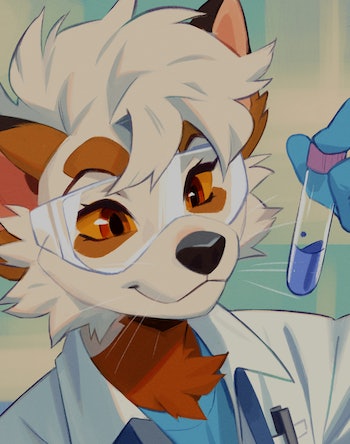 When she was a young girl growing up in the U.S., Chise had two big dreams: being a doctor and starring in a Disney movie.

As she progressed through school, Chise (her online pseudonym) adjusted course, getting into molecular and cellular biology. “I was always really interested in viruses and moved my way into vaccine development,” she says via Zoom.

Today, she’s in her thirties and, as she’s publicly stated before, was involved in the development of the Moderna coronavirus vaccine, which is being injected into the arms of tens of millions of people worldwide. (Input has confirmed her connection to Moderna; she’s asked that certain other professional and biographical information be withheld due to fears of doxxing.)

But one element of Chise’s young life stuck with her: her interest in the whimsical, animal characters she encountered in Disney movies. Six years ago, a former lab colleague introduced her to the anthropomorphic community, commonly known as furries, which involves people taking on the persona of animals, often spending thousands of dollars on detailed suits and attending conferences to socialize with fellow furries.

“It was just fantastic,” she recalls. “I fell right into it.” Her “fursona” is a white-furred pine marten with brown spots above her eyes and on her chest.

When COVID-19 struck, Chise saw that her fellow furries on Twitter were puzzled by the pandemic and measures to slow and stop it. She had the scientific know-how to translate it to them. So she did. But her tweets, which highlight good news and breakthroughs in the battle against COVID-19, quickly became popular outside that community.

In January, she went viral for debunking a thread on the viciousness of the South African COVID variant by Eric Feigl-Ding, who focused most of his research pre-pandemic on nutrition, but quickly grew his audience from 2,000 followers to more than 500,000 by tweeting out pessimistic multi-part threads containing screenshots marked up with red circles to highlight what he sees as the most worrying data on a chart.

Chise is followed on Twitter by more than 60,000 people, 400 of whom have tipped her for her tweets through third-party website Ko-fi, because of her optimistic slant on the pandemic. But for every hopeful tweet about COVID-19, there are plenty of naysayers with even larger followings. Feigl-Ding has been wrong about COVID plenty of times, including tweeting claims that farting could spread COVID that were rapidly debunked. (Feigl-Ding did not respond to a request to speak for this story.)

Taking on Feigl-Ding, Chise reckons, put a target on her back among the COVID-pessimist community.

Most recently, that community has attacked Chise for what they think of as dangerously optimistic appraisals of the state of the pandemic. One German physicist, Cornelius Roemer, created a since-deleted Twitter thread about Chise, attacking her credibility and ability to speak with authority on COVID. Roemer is an advocate for a zero-COVID strategy, which calls for a temporary, stringent lockdown and accompanying containment measures.

Among his accusations was that Chise’s pseudonymity indicated she had something to hide, and her fursona meant she was less of a scientist.

“When you look at that thread, you have to sit there and realize that it wasn't any issue with what I had said — the issue was with me and how I said it,” says Chise. “You see people on Twitter attempt to make it seem like you’re less of a person because you’re a furry. As if somehow you can’t be intelligent or your opinions don’t matter.”

Roemer himself has been accused of burnishing his qualifications online to make his declarations more authoritative. After replying to an initial interview request, Roemer did not respond to repeated follow-ups. On May 26, he did post a new, more measured thread recommending people read Chise’s “tweets with a big grain of salt.”

Both sides of the argument have fallen into the perennial problem for internet posters, particularly on Twitter, where character counts crunch down sentences. All nuance is removed when you live online. And science is rarely black and white.

“The issue with a lot of this data is there’s still quite a degree of uncertainty about it,” says Paul Hunter, professor of medicine at the University of East Anglia, U.K. “I think there’s an element of people bringing their personality to this. If you’re an optimistic person, you try and look at the good side of it. And also your politics, particularly in America, seem to play a role.”

Dr. Müge Çevik, clinical lecturer in infectious diseases and medical virology at the University of St. Andrews, U.K., also thinks social media popularity is pushing people to extreme approaches. “Before the pandemic, I don’t think many academics had this big a platform,” she says. “It can be a little bit mesmerizing. You can lose perspective sometimes.”

Dr. Linda Bauld, chair of public health in The Usher Institute at the University of Edinburgh, U.K., agrees. “There's an addictive element to this,” she says. “We need to give the kind of advice we give to teenagers: Try to use social media responsibly; there’s a dopamine pathway in the brain that's affected by this, and it’s not good.”

Bauld follows both Chise and Roemer on Twitter, but has little time for their declarations. “Both of them are very poor, in my personal view, at communicating uncertainty,” she says. “There’s a real risk of making things too simplistic, as in positive or negative.”

While Bauld and Hunter believe Chise’s relentlessly upbeat language — something Roemer highlighted in his since-deleted thread — encourages laxity around COVID regulations, they also think people like Feigl-Ding have trivialized the pandemic. “You should very carefully consider the language you’re using when you’re trying to convey scientific concepts,” Bauld says. “My own personal opinion is that you should keep away from lots of exclamation marks and pictures of fireballs, like Eric does.”

“Harassing and targeting any scientist for any reason is unacceptable.”

Bauld also thinks the ad hominem attacks distract from the real concern: the pandemic that has killed millions to date. “It’s the bad side of social media,” she says. “We should be able to exchange information without these kinds of arguments. You see them popping up all the time.” They’re doing so, she says, because we are all incredibly tired. Tired of lockdowns, tired of death, and tired of fear.

But that’s no justification for the attacks, reckons Çevik. “Whatever their arguments, harassing and targeting any scientist for any reason is unacceptable,” she says. “That’s why I think what Cornelius did is unacceptable. You may disagree and come up with your own arguments, but criticizing an account based on credentials isn’t good.”

Çevik worries that scientists’ public squabbles could discourage people from taking scientific advice. “The public will disengage — that’s the worst thing that could happen,” Çevik says. “We want the public to engage and understand what’s happening, but because of the discourse, people will get more disinterested, and it will cause damage to trust in science, scientists, and public health.”

For her part, Chise is trying to stay above the fray, in part for fear of attracting further trolling, and also to try and keep the focus on data. “The threads and the information that I provide can stand on their own, but I don’t need to beat anybody down to bring myself up or to get my point across,” says Chise. “It doesn’t look very good. And that’s where we have come to an issue.” She says people have attempted to hack into her social media accounts and to doxx her.

Chise worries that if they succeed in uncovering her identity, she’ll be discredited at work because of her pastime. “My job isn’t really aware of my participation in the furry fandom,” she says. “It’s something I keep close to me.”

Nor will she stop being sunny. “Being encouraged and feeling positive about data, especially when relating to the effectiveness of the vaccines and their application in the real world and helping this pandemic come to an end, should be celebrated,” she says. “It’s not like I’m making up data. I’m reading studies, presenting the data and am highly enthusiastic about it, and I guess it comes through with my tone. I don’t think that should be disdained. If anything, I have to ask: Why would you not be optimistic about it?”

And once the pandemic is over, she plans to go back to what she was working on before this: influenza. And she’ll be bringing the same boundless optimism she’s had about the COVID vaccines. “I’m looking forward to improving our influenza vaccines,” she says, her voice full of hope. “Can you imagine having one that's as effective as these COVID vaccines?”