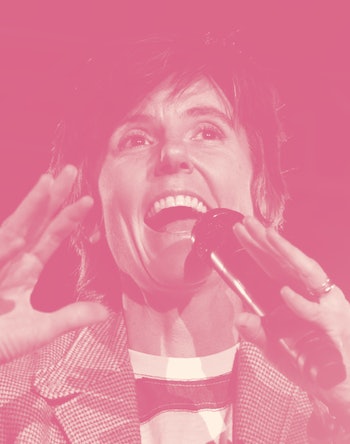 Nine times out of 10, I'm so paranoid about inadvertently hitting “send” before I'm satisfied with the contents of an email that I draft messages in Microsoft Word before pasting them into Gmail. So imagine the anxiety I felt a couple of weeks ago when I officially took over comedian Tig Notaro’s Twitter for the day. After all, she has 163,300 followers, a whopping 180 times more than I have on my own account.

Notaro’s Twitter account is notable because, for the better part of five years, it's been run by a different person every day. This exercise started out as an inventive way for the social media–averse Notaro to outsource the task of maintaining her account by passing it off to famous comedians like Sarah Silverman and Kumail Nanjiani, but it's gradually transformed into something else. It's now a valuable branding opportunity for the various aspiring creatives, such as myself, who’ve been granted temporary custody of it.

That morning, after pasting my first Tig tweet into Twitter’s composition box (I’d already typed it out in my phone’s notes app, of course), my finger hovered over the "tweet" button for an unholy amount of time. Here’s what I ultimately sent out to the world:

I hadn’t intended for this tweet to do much more than introduce me to Notaro’s followers, but I nonetheless felt a pang of disappointment when it landed with a thud. Maybe people were put off by the socialist connotations of my “comrades” salutation, I thought, cursing myself for neglecting to consider the term’s politically charged history. Perhaps I should have quoted a different joke to highlight my sensibilities? I wondered. Thus began a day-long adventure of sending tweets and instantly regretting them.

Provided they've been recommended by a previous account administrator, nearly anyone can use Notaro's Twitter account to signal boost their ideas, shout out friends, promote causes, and otherwise indulge their flights of fancy. In the interest of full disclosure, I should note that my personal path to taking possession of this account was a bit unorthodox. Rather than wait for someone to pass my name along to Patrick McDonald, Notaro’s assistant and the ongoing supervisor of the account, I reached out to McDonald personally. "Tig loves seeing where her Twitter ends up but truly has no interest in [running it]," he explained to me via email. He was kind enough to set aside a day for me to experience operating Tig's account firsthand.

“Tig loves seeing where her Twitter ends up but truly has no interest in running it.”

My 24 hours running Notaro’s account began with a message from McDonald sharing Notaro’s login information and outlining the conduct guidelines he requests those tweeting in Tig’s name abide by. In short: to send a maximum of 10 tweets (including replies and retweets), to limit self-promotion to two instances, to "keep things positive/refrain from making any form of personal attack," and not to send private messages from the account.

(When asked how often he’s had to step in to enforce these guidelines, McDonald explained that he’s sensitive to the notion of limiting anyone’s comedic voice and, thus, he’s grateful he’s only ever had to intervene on a couple of occasions: “For the most part, everyone I’ve asked to tweet has been super respectful, nice, funny, and cool!”)

In truth, my day tweeting on behalf of Notaro actually began the moment McDonald first replied to my initial email nine days earlier. As a frequent Twitter user who's been tweeting jokes in relative obscurity since 2011 — and someone who’s been following Notaro’s account since it was first created in 2015 as a promotional tool for her HBO comedy special Tig Notaro: Boyish Girl Interrupted — I can't overstate how excited I was about this opportunity. I tend to hyper-analyze everything I do, so I dedicated an unhealthy amount of thought to how best to capitalize on this platform.

I spent hours combing through my old tweets to determine which to repost. I reached out to a Facebook group comprised of local comics from Toronto, where I'm from, to source recommendations of whom to signal boost (I picked Luba Magnus based on the bite-sized nature of her funny animations, which seemed perfectly suited for Twitter). I ventured down an extensive rabbit hole, learning all about the study of "effective altruism" in order to pick a charitable cause to champion.

The tweet I sent out about that charity, my third tweet of the day, was perhaps my earliest indication that I was doing myself a disservice by excessively overthinking my approach. Concerned about coming across as cloyingly self-righteous on a platform where most people just make jokes, I decided to couch the presentation of my heavily researched charitable cause in lighthearted messaging, ultimately undercutting the tweet’s effectiveness and leading to a grand total of two people clicking on the donation link I provided.

And because the organization I linked to, Give Directly, operates by delivering unconditional cash transfers directly to low-income households in developing nations, one tweeter interpreted this as a sign that Notaro herself might be interested in Andrew Yang's presidential campaign (due to his completely unrelated proposal to implement universal basic income in the U.S.). To be clear, I had no intention of getting involved in presidential politics. I can't even vote in the U.S. — I'm Canadian!

Of course, this wasn't the only time my inclination to think too hard got in the way. For example, I elected not to tweet a morbid joke speculating whether death feels anything like closing all the tabs on your internet browser, worrying that the mood on Twitter would be too somber following the tragic deaths of Kobe Bryant and his daughter Gianna. I also decided to film an underwhelming comedy sketch — despite having never done so previously — because I observed these videos had historically performed well on Notaro’s account.

I know I wasn’t the only Tig stand-in to plan out my approach in such detail. Before I took over Notaro’s account, I spoke to Maggie Winters, a Chicago-based comedian who’d run the account for a day in December 2019. She explained to me that the specified upper limit of 10 tweets was actually “somewhat of a relief,” in that it kept her from “having a meltdown the whole day.”

"I didn’t want to freak out too much about it," she informed me when I asked about her preparation for the experience. "But I did look through my tweets the night before to see which ones I could share that would do well and highlight my comedic voice, as well as to figure out a few friends to promote.” Consequently, she said, her day with the account yielded “a good amount of followers and a lot of love for the things I shared.”

Conversely, my conversations with Rajat Suresh and Steph McCann — both of whom McDonald praised for their unique approaches to handling the account — made me feel silly for spending so much time premeditating my strategy. “I don't know how much I really thought of the account in terms of opportunity,” said Suresh, who spent his entire day with Notaro’s account pretending to be broadcaster Larry King. “I just decided to do something crazy with it because I thought it would be funny.” Similarly, McCann told me, “Absolutely zero thought went into it. Everyone has their own distinct voice. Mine has always been that I'm going to tweet the things I think are literally only funny to me, and if you like them: that's cool!

I regretted wasting one of my 10 tweets on a niche dud.

“I stress myself out when I overthink things,” she added, “and the result of that is always overcooked, insincere stuff.” Looking back on it, I should have kept these words in mind during my own day running the account.

I felt at my least authentic when sent out my seventh tweet of the day. Underwhelmed by the amount of traction my first six tweets had garnered, I pivoted from my usual sense of humor to post an esoteric joke that required knowledge of the interview style of oddball music journalist Nardwuar the Human Serviette and the plot of the Harry Potter series. I had hoped something magical would happen. Instead, I regretted wasting one of my 10 tweets on this niche dud that wasn't even an accurate reflection of my comedic sensibilities.

With the benefit of some distance from this experience, I can now appreciate that I didn’t entirely botch my opportunity to tweet for Tig. I picked up 26 new followers on my personal account and sent out multiple tweets that racked up more than 150 likes. Granted, relative to the size of her platform, these raw numbers are unimpressive, and the fact that I began to think of Notaro's followers as faceless engagement statistics — rather than as actual human beings — can't be healthy. If dozens of people came up to me at a party to tell me they liked my dumb joke about Nardwuar, I'd be thrilled. Yet, when dozens of people conveyed this to me via Notaro's Twitter, I was disappointed.

So signing off at the end of the day felt surprisingly freeing. I picked one final joke to promote, a mildly amusingly observation about hiking, and the next day I went back to tweeting jokes from my personal account as if the experience had never happened. I didn’t miss the pressure of trying to go viral or the feeling of watching intently as like counts turned over in real time.

In the days that followed, I watched, through the eyes of someone who’d done it already, as others tended to Notaro’s account. Were they happy with the joke they’d just tweeted or did they immediately regret it? Was it something they’d have tweeted regardless or a post specially crafted for Notaro’s platform? Then I’d send out my own half-baked tweet about a snack recipe and feel perfectly content with my relatively measly 906 followers.