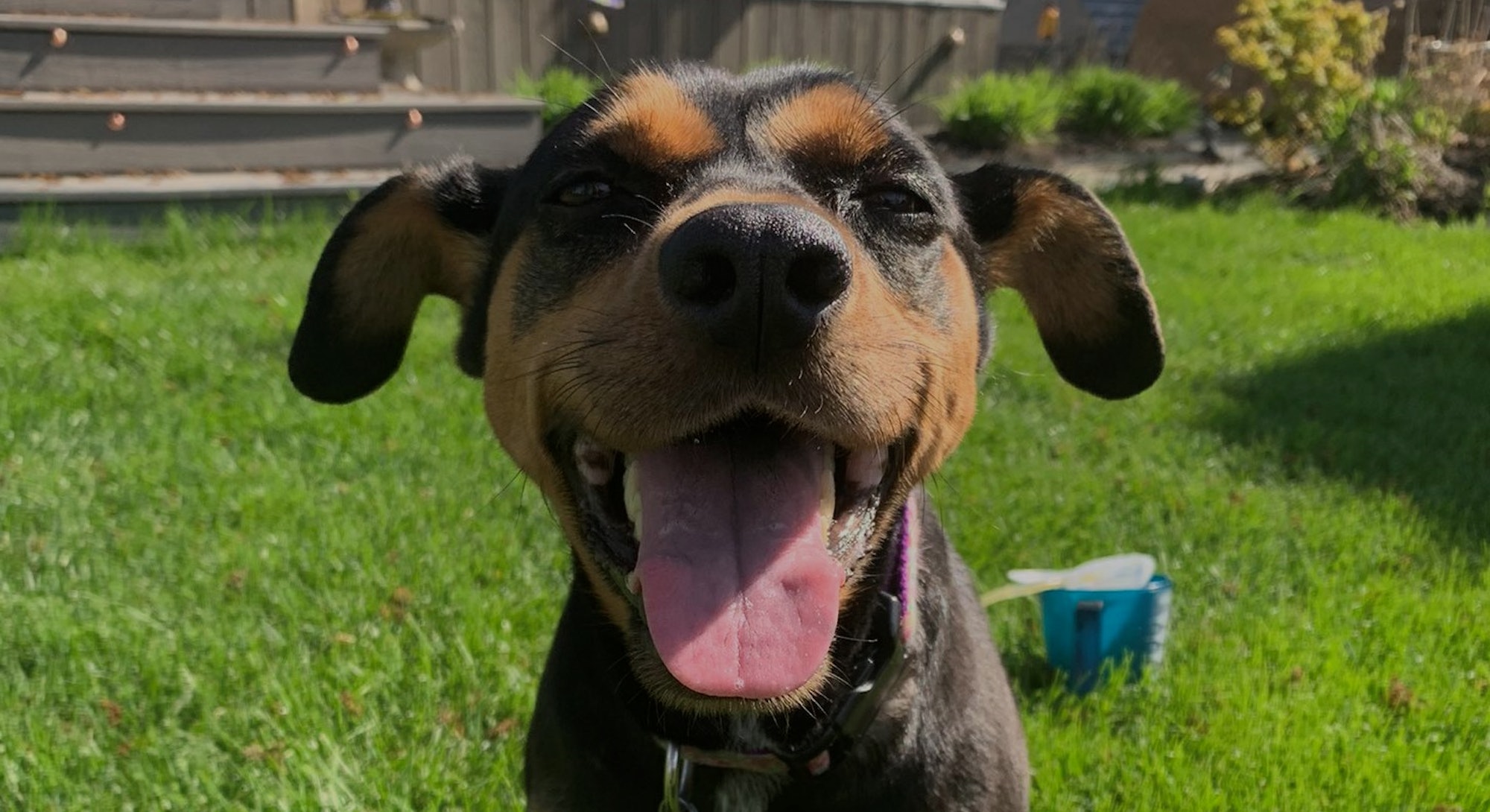 Years ago, at a dinner party, a friend asked if I knew my dog would someday die. She meant it as a joke, a light jeer at my devotion. My husband and I never forgave her that slight.

Of course Dory, a beagle-hound mix we rescued in 2014, would die one day. We weren’t delusional. But we wouldn’t know how it felt — couldn’t squint at that feeling — until the day in late April when a surgeon called and told us our dog, who was nine years old, had cancer.

Even the surgeon cried on the phone, her voice breaking halfway through the bleak prognosis. “The worst things happen to the best dogs,” she said. And sweet, shy Dory was the very best.

From that instant, my grief toppled me. It built a constant buzzing in my ears. I cried so much I became dehydrated. I slept on the floor with her. I’ve heard it said that grief is like a fog, which I found only partially true: The entirety of our lives felt immaterial, out of focus, while the loss itself was barbed wire.

Not everyone seemed to understand this feeling. I raged against the friends who texted but never called. I wanted so badly to be reassured: to be told Dory was a beautiful, beloved dog.

What’s more, I wanted to rehash — for hours upon hours, with no arc or resolution — the veterinary errors that preceded her death. The catalog of places she liked to curl up in the house. The way she’d wag her tail so hard when she saw you, her whole body would flail with the force of it.

I wanted to tell someone that before the injection that put her to sleep, we gave Dory a chocolate cupcake with buttercream on top. She devoured it, wiggling weakly in my lap.

And then she was gone.

The one thing that did seem to help was reading about the dogs other people had lost.

In the days after Dory’s passing, my therapist suggested I work through my grief and anger by writing online reviews for her veterinarians. I couldn’t bring myself to do it — the things I most wanted to say wouldn’t help other pets. We tried a pet loss support line at a nearby college. A baby-voiced student answered the phone. She stumbled through a set of scripted sympathies before I had the wisdom to beg off.

The one thing that did seem to help — in a way that wine, Xanax, or even our 10-month-old puppy, Nemo, did not — was reading about the dogs other people had lost. In a fit of desperate Googling (“dog grief resources,” “dog died support group,” “psychology of dog loss,” etc.), I somehow found the AKC Pet Loss Support Group, a 7,000-member Facebook forum administered by the American Kennel Club.

It was an unlikely remedy. The AKC is, at its heart, a social register for purebred dogs. Dory, who was picked up on a street in West Virginia, would never have been eligible for its fancy televised dog shows, even if we’d had the discipline to train her to do more than “sit” and “shake” when prompted. I’m not a huge fan of Facebook, either. I only kept an account for work and my neighborhood block club.

But when you’re falling, you’ll reach for any handhold. Facebook promised one.

Miranda Carney, the 27-year-old digital editor of the AKC, founded the Pet Loss Support Group two years ago, when her 16-year-old pug died in her sleep. After trying and failing to find a support group online, Carney pitched the idea of a Facebook group to her bosses at AKC.

Her posts about skinny, crone-faced Lovepug were some of the group’s first. “I feel like I will never be the same again,” she wrote, above a picture of the pug dressed in a pink sequined tutu. Beneath it, the group’s earliest members offered compliments, condolences, and phone numbers.

There’s a protocol to grieving a dog online, it turns out. A set of standard steps. Members of the Pet Loss Support Group tend to post at three specific junctures, though Carney says that someone once posted daily for six months in a kind of digital vigil for his pet.

First people share their initial remembrances, posted the day after the dog died or shortly thereafter after. (“The most desperate post,” Carney says.) Many members write again a week or two later, when they retrieve their dog’s ashes from the vet. And some will post a third time, many weeks or months later, when they begin to wonder if they can love another dog again.

In between, the members share photos and videos of their pets. Spaniels swimming in a lake. Terriers chomping treats. There are a surprisingly robust catalog of memes and comics about dead dogs, meant to soothe the grieving. In one popular Facebook image, a puppy tells the ghost of a golden retriever that the family still talks about him:

It’s an amateur, schlocky, sentimental meme, but when I describe it to Carney, my throat clenches.

In those first days, after I posted my own photos and memories of Dory, I found myself checking my phone at odd moments to see how many strangers had liked or commented. “Such a devastating loss,” one woman wrote. “You did everything u could, u were with her when she left.”

Over time, however, I gravitated to making comments on other people’s posts. It became an occasional habit, a 30-minute reading spree in which I’d devour the tragic ends of a dozen other dogs, and then blitz out some “thoughts” and “warm wishes.”

Sometimes I would post things without knowing their truth: “One day, these memories will bring you joy again.”

I could not, had not, saved Dory — a failure that sometimes woke me in cold sweats. But I found I could comfort these strangers in a way I couldn’t comfort, or forgive, myself.

“What a handsome bub,” I wrote to the owner of a lanky, fawn-colored hound.

“She’s beautiful and clearly very loved,” I posted on the photo of a rotty with her tongue hanging out.

Sometimes I would post things without knowing their truth: “One day, these memories will bring you joy again.” It was a pretty bold promise from someone who still walked quickly, eyes averted, past the places where Dory’s bed and toys had been. “It is harder for us than it is for them,” I wrote. “She was lucky to have you.”

The more I typed these reassurances, the more I came to believe them.

Carney tells me that few members ever leave the Pet Loss Support Group. They tend to stick around, comforting other dog owners and promising them that the staggering, shameful depths of their grief are to be expected. Even if she didn’t moderate the group for work, Carney would still check in. It’s Lovepug’s legacy, she says.

Dory has no legacy to speak of, yet. The fact that we survived her death still startles us. I recently read that the co-author of the famous Kübler-Ross model proposed a sixth stage of grief a few years ago — an epiphanic final chapter in which the mourner finds some “meaning” in her loss.

I have strained to make meaning of mortality, of the cruel truth that life just… goes on. Even with Dory’s ashes sitting, impossibly, in a wooden box on our mantel, we have returned to laundry and barbecues and assignments like this one.

One day, perhaps, my husband and I will foster or rescue another stray dog so that Nemo isn’t alone. One day, I might even forgive the vets who misdiagnosed Dory, or that friend who once taunted us over our attachment to her.

But for now, I find a smaller, more modest purpose on Facebook.

She was a beautiful, beloved dog, I type to strangers. She is not “gone” — not really, not ever.