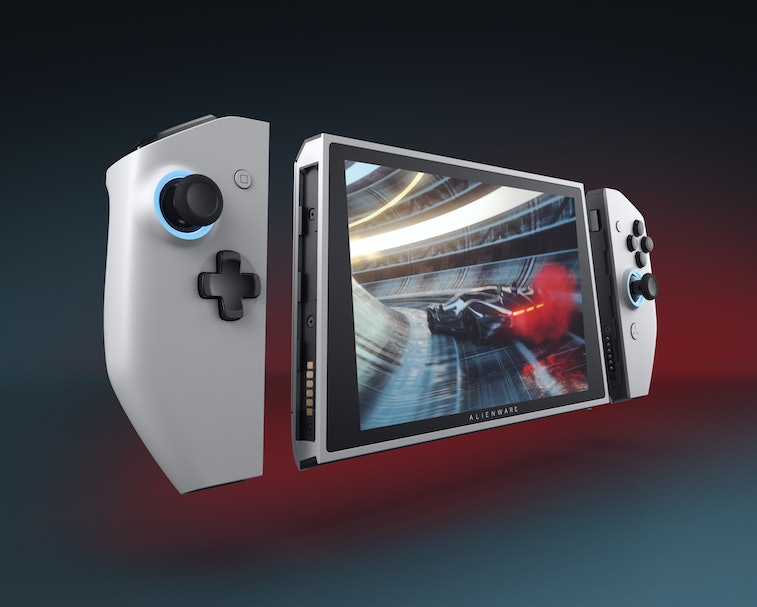 Alienware has given us a sneak peek at a concept console called "Concept UFO" that fuses a Windows gaming PC with a Nintendo Switch, ultimately underdelivering on both fronts. Although this likely shouldn't go into production, it's fairly instructive on why both gaming PCs (even laptops) and flagship consoles both succeed where this type of hybrid thing generally fails.

Tom's Guide got an exclusive look at the device which, to be fair, looks gorgeous. The UFO is currently pretty scant on details, with writer Sherri L. Smith speculating that it's "an Intel-powered device, utilizing at least a 10th Gen Core i5 processor and Intel Iris Pro graphics," which points to the obvious struggle to balance performance and battery life in this type of form factor. The product also features detachable controllers for docked gaming which may be an idea we've seen somewhere before.

Try, try again — Previous products like the NVDIA Shield, the Razer Edge Pro, and the GPD Win line of devices have failed to catch on because balancing performance, price, and battery life has proven pretty difficult. The advent of streaming services like Stadia, xCloud, Playstation Now, et. al could also be a death knell for portable consoles doing on board processing — especially large ones that probably don't leave the home Wi-Fi anyway.

The challenge — The reason a gaming PC succeeds is because it delivers cutting edge graphics and precision controls to serious gamers looking to spend serious money. The reason underpowered handheld consoles like the Switch succeed is because bulk manufacturing and game exclusivity can deliver highly polished, exclusive experiences at fairly affordable prices. These two models also compliment each other to consumers looking for both powerful experiences and convenient ones. Handheld PC concepts like this have the weaknesses of both those models without either of their strengths.

Early days — We could tell you all the specifics about this concept device — it uses USB-C, uses the Alienware Command Center to wrangle all your games, and has its own kickstand mode — but honestly what would be the point? This device isn't coming to market, it's just a chance for Alienware to get customer "feedback" on the idea – a service focus groups are usually paid to perform. While the dream of the handheld gaming PC is alive and well in all gamers' hearts, until we see a massive shift in processing power and/or battery life on mobile chipsets, this concept is, sadly, destined to fail.