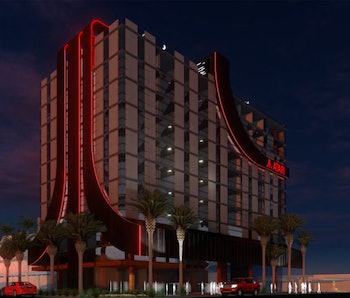 Just when you thought nostaliga-mining had already reached its peak: Atari is in talks to build a series of gaming hotels across the country. The hotels, which will be created in conjunction with innovation and strategy company GSD Group and real estate company True North Studio, promise to be a “one-of-a-kind video game-themed destination.”

The hotels are planned for Phoenix, Las Vegas, Denver, Chicago, Austin, Seattle, San Francisco, and San Jose, and the first is set to break ground in mid-2020.

So wild it just might work — At first glance, a video game-themed hotel might sound too gimmicky to be anything other than an old company’s pipe dream. But there’s reason to believe that, if executed well, the Atari Hotel could actually work. As the company reports in its press release, more than $152 billion was spent on games last year alone. And games love to get together and compete. A hotel with this focus could be a huge draw for serious gamers and even families.

What will it be, though? — Atari hasn’t released all that many details about the hotels. The company promises “state-of-the-art venues and studios” where esports and other gaming competitions can take place. There’s also talk of both virtual and augmented reality gaming options, which would be a pretty big draw in and of itself. Notably, there’s also no mention of whether or not classic Atari games will be playable at the hotels.

Atari also mentions restaurants, a movie theater, a gym, and space for business work. Eclectic, to say the least.