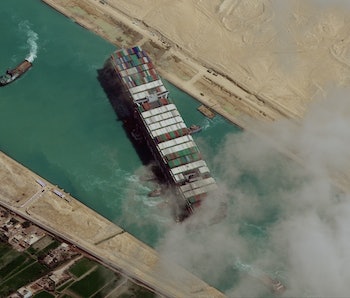 Now that one of the world’s biggest cargo ships, the Ever Given, has been successfully dislodged from the Suez Canal in Egypt — where it sat for a week blocking a not-insignificant portion of global trade and which saw it memefied all over the internet — CNN wants you to virtually steer the behemoth through the narrow waters in this interactive game.

The CNN interactive Ever Given simulation is neither as sexy nor as exciting as we’d hoped. It’s no Doom or Resident Evil when it comes to thrills and spills. And it’s nowhere near as colorful as Stardew Valley. There’s no music, its graphics are incredibly elementary, and the captain’s messages for you start to get annoying fast. But it definitely gets the daunting and tiresome part of steering a giant ship right.

Slow going — The game is comically drab. As the virtual captain of Ever Given, you get to steer your ship with the help of a control panel on the right side of the screen. Rudder angle and power levels will give you an idea of where your ship is headed and just how fast it's going. All you need to use are the up, down, left, and right arrow keys on your keyboard. Despite being visually monotonous, the game does demonstrate just how tricky nautical navigation can be, especially when what you’re piloting is the size of a skyscraper, and about as maneuverable.

The slightest moment of negligence will result in a collision or, as we saw over the past week, the ship getting stuck in the middle of the Suez Canal if you don’t angle it correctly.

The top left of the screen shows wind direction, speed, and your engine's power. There's no music, no rewards, and not even fireworks (or honking tugboat horns) to congratulate you if you steer the ship successfully. But you do receive messages from a virtual captain informing you of wind conditions and, if you sail too close to land, your ship will give off faint yellow circles to alert you to the imminent risk of ruining many gamers' lives by prompting manufacturing delays to some of the year’s most anticipated gear.

Try MS Flight Simulator instead — If you want to have a more entertaining time reliving the Suez Canal debacle, we recommend that you give Microsoft Flight Simulator a chance. The Suez-Canal-plus-Ever-Given add-on isn't an official addition from Microsoft, but a cheeky one a fan made which you can grab for free. It's far more visually captivating and you don’t have to do any sailing.

As you fly over the virtual Suez Canal in the aircraft of your choosing, you see the Ever Given stuck in the canal’s southern segment with the virtual Egyptian landscape on both sides, including buildings, a little vegetation, and in this particular gamer’s case, you can even turn to your co-pilot and incredulously ask, “What kind of stupid captain would do that?” There’s an explanation for that, too. Sorry CNN, but maybe stick to the news and leave video games — and sailing — to the pros. We certainly will be.